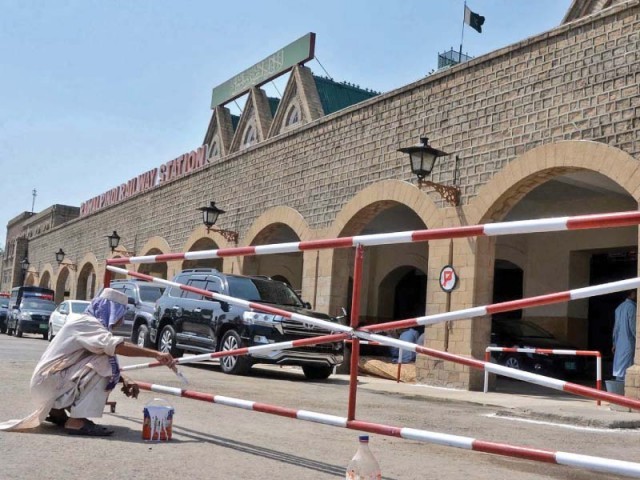 A worker paints a barrier at the Rawalpindi railway station ahead of PM’s visit. PHOTO: INP

Prime Minister’s Adviser Naeemul Haq is expected to  give the briefing next week.

The project worth Rs700 million is not included from of Rawalpindi Development Authority’s (RDA) annual development programme for 2019-20 despite being a major route used both by the general public and the VIPs.

Owing to increasing traffic congestion in the city, the project was termed inevitable five years ago however it got mired in delays and was limited only to a feasibility study prepared in 2013.

In 2017, the Planning and Development (P&D) Department Punjab included the project in its priority list. However it remained unapproved due to unidentified reasons.

The sources said that interest shown by the prime minister in the project had raised hopes that it would see some progress in the near future.

The intersection project, after completion, will ensure smooth flow of traffic from Rawalpindi district courts to Islamabad Airport and onward to Koral Chowk through Ammar Shaheed Chowk and from Koral Chowk to Lahore, Islamabad and Chaklala.

The Rawalpindi Railway station has been cleaned, painted and polished ahead of PM Imran’s visit on Wednesday to inaugurate luxury train the Sir Syed Express.

The porters have also been instructed to come in clean uniforms while a new washroom has also been constructed for differently-abled persons. The administration has also placed wheel-chairs at station’s entry gate.

All platforms and surroundings have been cleaned while stall-holders have been strictly directed to polish up and place good items on the shelves.

Railways Divisional Superintendent Munawwar Shah was personally monitoring the preparations for the big day. The Punjab police have also been deployed in order to ensure full security.

The new Sir Syed Express has been rolled out on the tracks, all set to chug out for its maiden voyage on Wednesday.

Officials said the train would leave or Karachi from Rawalpindi Railway Station at 2:30pm via Faisalabad. It will start its return journey at 9pm from Karachi Railway Station.

Railways Minister Sheikh Rasheed was at the Rawalpindi station to review the arrangements for Sir Syed Express launch.

Talking to the media, he said they had cut down railways losses by Rs3.4 billion. He said the deficit had been slashed from Rs36.62 billion to Rs.32.59 billion.

Rasheed added that induction of 24 new passenger coaches added Rs6 million and taking the number of total train users to 60 million. “Our target is 70 million passengers on board various trains of Pakistan Railways,” he said and added that he had asked the prime minister to upgrade scales of railway employees. “If he does not approve it, I would personally raise salaries by 10%,” he said.

Rasheed said wheels of the railways have embarked on a new journey. In this regard, freight trains’ headquarters had been moved to Karachi as freight business was there. Any officer refusing to go to Karachi would be suspended, he said.

The minister claimed that in nine months, railways collected so much revenue which was not done in past 70 years.

He blamed the previous government for railway accidents and said they occurred because of worn-out infrastructure.

To a question, he said that those who had encroached railway land in Rawalpindi should evacuate them on their own otherwise all illegal structures would be demolished.

While talking to The Express Tribune, the railway minister said that fares were only increased on routes above 50 kilometres.

With additional input by Qaiser Shirazi