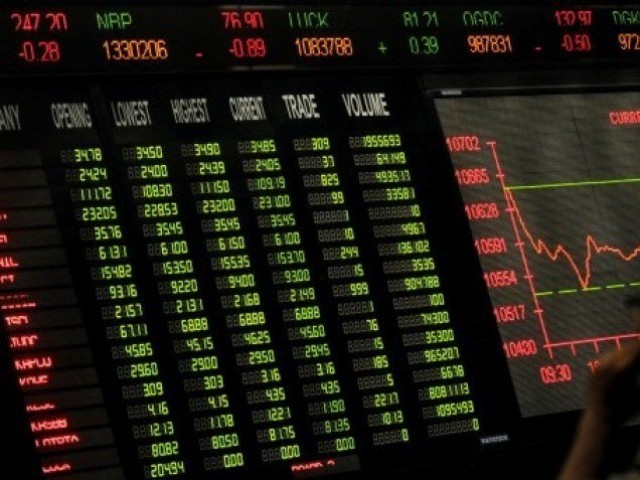 KARACHI: Despite wild fluctuations, the stock market closed its last trading session of the current financial year in the green, buoyed by a smart recovery of the rupee.

In the morning, the KSE-100 index opened on a negative note and dropped over 360 points in intra-day trading before the market paused for midday break. However, the rupee’s significant gains against the US dollar helped the index recover the losses made in the first half.

“Mixed sentiments were seen in the financial sector where big banks HBL (-1%) and NBP (-2.5%) closed negative while ABL (+2.5%) and MCB Bank (+0.3%) remained in the green. International crude oil prices held steady ahead of key meetings of OPEC in the coming week,” Mulla said.

In the exploration and production sector, Pakistan Petroleum (-1%), Oil and Gas Development Company (-0.7%) and Pakistan Oilfields (-0.9%) were in the red zone.

A rally was witnessed in the cement sector where Cherat Cement (+4.2%) closed near its upper circuit and Lucky Cement (+2%), DG Khan Cement (+2.6%) and Fauji Cement (+3.9%) also remained in the green zone on the back of news that cement players might increase prices and pass on to consumers the rise of Rs20-25 per bag due to the increase in federal excise duty.

“We expect the market to remain volatile due to developments on the economic and political fronts. Furthermore, the International Monetary Fund (IMF) Executive Board is scheduled to meet in Washington on July 3 to consider a three-year, Extended Fund Facility of $6 billion for Pakistan,” the analyst said.

Overall, trading volumes increased to 213.9 million shares compared with Thursday’s tally of 135 million. The value of shares traded during the day was Rs6.3 billion.

Shares of 338 companies were traded. At the end of the day, 204 stocks closed higher, 109 declined and 25 remained unchanged.

Foreign institutional investors were net sellers of Rs146.7 million worth of shares during the trading session, according to data compiled by the National Clearing Company of Pakistan.

‘Back on track’: China, US agree to restart trade talks