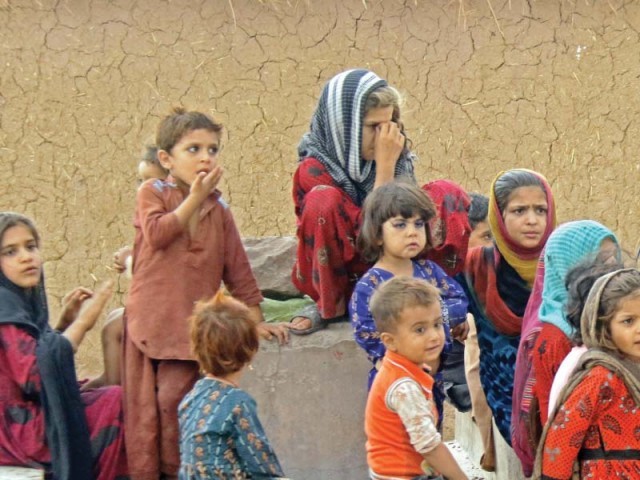 Afghan children sit outside their mud house in a refugee camp in Islamabad. PHOTO: ZAFAR ASLAM/EXPRESS

ISLAMABAD: The 47 year old, Hafeezullah Haideri has been living in Pakistan for over the past four decades as an Afghan refugee. He has a vague image of his house in Afghanistan as he was very young when his father had to leave their hometown due to unrest.

Naturally, like millions of Afghan refugees living in Pakistan, Haideri feels more connected with Pakistan, a land which does not belong to him in law but he loves to bits, than the land of his ancestral Afghanistan, where his forefathers are buried.

“Now my children are even taller than me, if this (Pakistan) is not our country, no place in the world will be. I visited Afghanistan twice after growing up but the moment I left Pakistan, my heart became so uncomfortable that I wanted to leave everything and come back here,” Haideri said when talking to the media.

According to the United Nations High Commissioner for Refugees (UNHCR), Pakistan is hosting over 1.4 million Afghan refugees, making the country the second largest host of refugee population in the world.

Some refugees have been living in Pakistan for three generations. They have established their business here, and some of them have even married locals and have been deeply integrated into the society. They do not think of going back to Afghanistan even in their wildest dreams as it would mean starting everything again from scratch.

The interim stay of Afghan refugees extended by the Pakistani government is coming to an end on June 30, and Minister of State for States and Frontier Region Shehryar Khan Afridi affirmed that his country supports voluntary repatriation of the Afghan refugees residing in Pakistan in safety and dignity.

In a recent meeting, Pakistan, Afghanistan and the UNHCR agreed to launch an awareness programme to enable Afghan refugees to make a decision to voluntarily return, with the facilitation and coordination of Pakistan.

Many Afghan refugees hope that the Pakistani government will again extend the deadline of their stay in the county. However, it is still unclear whether the Pakistani authorities will do it or not.

Sixteen year old, Abdul Jamal was born and bred in Pakistan. As a college student, Jamal knows all the national songs of Pakistan. He celebrates Pakistan’s Independence Day in his school in Islamabad where he is one of the very few refugee boys. He supports the Pakistani cricket team and is more heartbroken than anyone when the team loses its match.

“When my mother tells me that maybe someday we have to leave here and go back to our home Afghanistan, I become very upset.