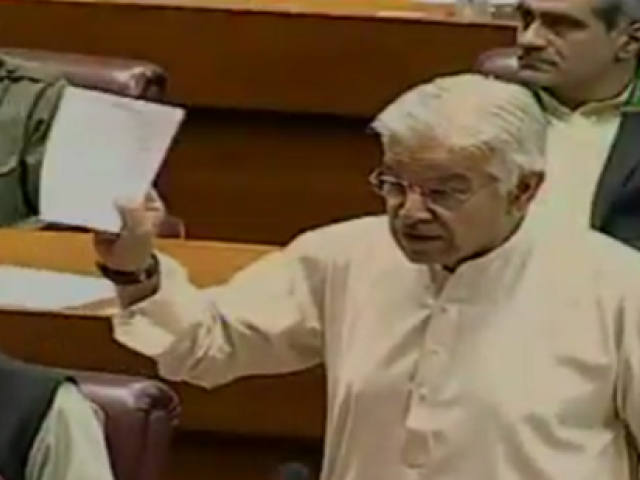 “Prosperity and strong economy make the country’s defence strong.  The Soviet Union had a large army but broke into pieces after its economy collapsed,” he said while participating in Federal Budget debate in National Assembly.

Asif said his party spent Rs116 billion for improving electricity transmission lines and overcome the issue of load-shedding to a great extent in five years, besides effectively tackling the issue of terrorism with support of security forces and law enforcement agencies.

Talking with reference to the PML-N’s supreme leader and three-time former prime minister Nawaz Sharif, he said Nawaz was not interested in becoming prime minister, again and again.

He said narrative of Nawaz Sharif, who is currently serving seven-year jail term at Kot Lakhpath Jail, is getting popular with the passage of time. “His slogan is to give respect to vote and that the Constitution is supreme. Let the people of Pakistan decide whether the PML-N should be in power or not.”

Asif said people who have changed their loyalties are to be blamed for the government-opposition rift. “There are some people who have been continually changing their political parties. They have a hand in the current political unrest in the country.

“All the people who are sitting in the first row of the ruling PTI government are passengers. The 10-year [foreign loans] investigation commission [announced by Prime Minister Imran Khan on June 12] should deal with these people,” said the PML-N leader.

He said: “Rented people cannot complete Imran Khan’s agenda. He must bring workers in the front.”

The former foreign minister said none of the previous governments in Pakistan had lost their credibility at such early stage of their term as the PTI-led government. “However, the PTI government must be given more time so that they cannot complain they were not given enough time to prove themselves. Let them expose themselves completely so that they do not jump on to containers again.”

According to Khawaja Asif, “If someone goes abroad for medical treatment, the government condemns them. But to fix the economy of the country, they have brought a doctor from abroad. Someone must ask the finance minister [Hafeez Shaikh], where he spent his time when not in power?”

Asif said his party would not disrupt proceedings of the house if the other side avoided confrontation, adding atmosphere in the parliament has great impact on routine life across the country.

He complained that when PML-N talks about congenial environment in parliament, it is accused of seeking an NRO (National Reconciliation Order). He said his party wants to run business of the house with sincerity for benefit of the common man.

He said the PML-N, during its five-year tenure, never took any extreme step leading to violence in the country. Asif underlined the need for ensuring supremacy of the Constitution and respect to vote.

The PTI’s Sahibzada Sibghatullah termed the budget balanced and people-friendly, expressing confidence that the government would succeed in putting the national economy on right track. He said the country would progress under the leadership of Prime Minister Imran Khan.

Pakistan is coming out of the Financial Action Task Force (FATF) grey list and the United Nations has also declared Pakistan ‘family station,’ which is reflective of the fact that ‘Naya Pakistan’ has started emerging, he added.

SJC to resume meeting on references against judges on July 2