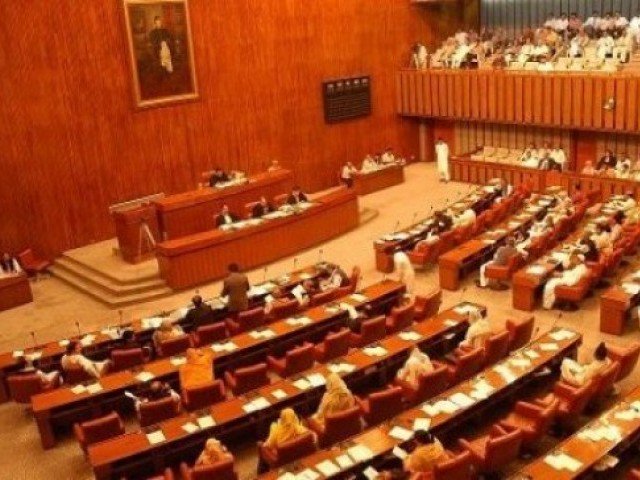 ISLAMABAD: The opposition parties in the Senate have rejected the budget for fiscal year 2019-20, saying that it offers no relief to the common man and is an “IMF budget”.

The session was held at the Parliament House on Thursday with Sadiq Sanjrani in the chair.

The Senate passed a resolution condoling the death of Egypt’s former president Mohamed Morsi. The resolution paid rich tributes to Morsi and demanded formation of an international commission to probe into the cause of his death.

Opposition forms body to win over PTI’s allies against budget

National Assembly Speaker Asad Qaiser also witnessed the proceedings of the Senate session. Qaiser was welcomed by the Senate chairman while others thumped their desks.

In his budget speech, Senator Raza Rabbani said, “The budget reflects IMF agenda, which is why it cannot be supported under any condition.”

He demanded of the government to reveal the terms and conditions agreed with the IMF team.

“The National Economic Council’s status is the same since its inception; therefore, there is no need for a National Development Council and the notification for it should be withdrawn,” he demanded.

Further, Senator Maulana Attaur Rehman was again given the floor to speak.

Without naming the prime minister, Maulana Rehman once against criticised Imran Khan, saying he did not want to discuss the budget proposed by the IMF.

He warned that if they were not permitted to speak, they would not allow anyone else to speak.

Senator Usman Kakar said, “All those who have taken loans in the country must be held accountable.

“Parliament is the supreme institution of the country, but it is being subjected to divisions.”

Kakar said, “The office of the president must not be used for any other institution. If decision against Justice Qazi Faez Isa is taken, a motion will be tabled against the president.”

He demanded issuance of production orders for Mohsin Dawar and Ali Wazir.

Senator Ayub Afridi said, “Going to the IMF is the need of the hour.”

Afridi said the government had reserved enormous amounts in its budget for the development of backward areas, including erstwhile Fata and Balochistan.

The Senate session was adjourned till 10:30am today (Friday).