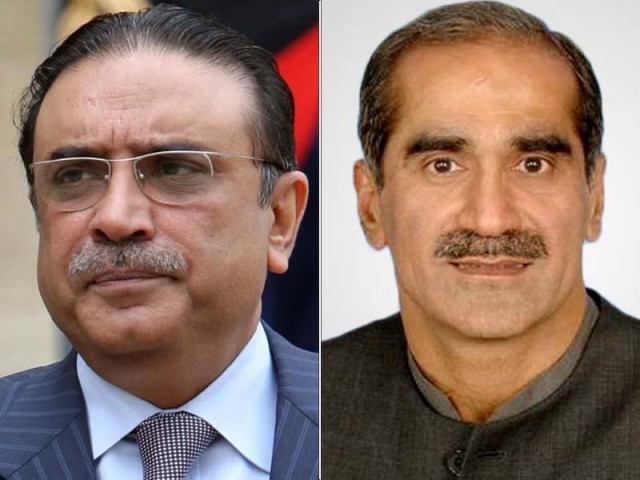 Both the leaders were arrested by the National Accountability Bureau (NAB) in separate corruption cases.

The opposition was agitating the issue in the lower house of parliament, paralysing the budget session. On Tuesday, the speaker had called leaders from both the treasury and the opposition to his chamber, in an effort to restore sanity to house business.

During the in-chamber session, an understanding was reached between both the sides of the aisles to let the house function normally and begin a debate on the money bill.

It was because the understanding that the house witnessed a relatively calm during the general debate on the budget.

The production orders were handed over to PPP leaders Shazia Marri, Qadir Patel, Shagufta Jumani and Agha Rafiullah, who were all in attendance at the National Assembly Secretariat for the same.

The production orders were issued under Rule 108 of the Rules of Procedure and Conduct of Business in the National Assembly 2007.

“Now Asif Zardari will attend the National Assembly in the morning [Thursday],” a jubilant-looking Shah told the media.

Meanwhile, the opposition rejected the budget for FY2019-20, with Leader of the Opposition Shehbaz Sharif warning that the spike in poverty it would create might lead to a bloody revolution.

In an hours-long speech that marked the end of a week of ruckus in the assembly, the Pakistan Muslim League-Nawaz (PML-N) president said the tax-loaded budget would massively overburden the common man.

He urged the ruling party to introduce changes that could alleviate the problems of the citizens.

The opposition leader demanded the inclusion of certain provisions in the budget. They included raising the minimum wage to Rs20,000, 50% increase in the salaries of Grade-1 to Grade-16 government officers, reduction of electricity and gas prices to what they were on May 31 last year, free-of-charge provision of life-saving drugs and withdrawal of the tax imposed on cooking oil.

Shehbaz said the finance bill had missed out on key points including provision of employment opportunities, measures to raise the gross domestic product (GDP) and steps to increase trade and exports.

Rebuking Prime Minister Imran Khan for his criticism of indirect taxes imposed by the PML-N, Shehbaz said the “leader of U-turns” had imposed 70% indirect taxes in the 2019-20 budget.

He said the provisions of the budget made it seem as if it had been directly dictated by the International Monetary Fund (IMF).

Referring to the two mini-budgets presented by the ruling party, Shehbaz said the Imran Khan-led government had failed to fulfill its promises.

NAB had no ulterior motive in Zardari arrest: IHC

“The PTI promised to build five million houses for the poor. Over 10 months later they haven’t made a single house and there’s no provision in the budget for any low-cost housing projects,” he remarked.

The PML-N president said the budget offered no relief to the poor. “There are no subsidies for farmers and other citizens. The subsidy is only for the bigwigs of the Pakistan Stock Exchange. Is this the Naya Pakistan we were all promised?”

Shehbaz also highlighted what he termed the government’s “blatant bias” in its ongoing accountability drive. “If the Peshawar BRTS [Bus Rapid Transit System] and other cases against PTI ministers are not being pursued, then we have no option but to see this accountability drive as nothing but a witch hunt,” he said, adding that BRTS in Peshawar now stood for “Biggest Robbery in Transport System”.

“The targeting of individuals must stop immediately. They can arrest the entire opposition. They can do their worst but we will oppose the anti-poor policies of this budget till the very last,” he asserted.

At the start of his address, Shehbaz said the abject state of Pakistan’s economy today was a reflection of collective failures over the past 70 years.

He said the unprecedented level of inflation had made life miserable for low-to-middle income groups, and highlighted the fact that Bangladesh’s per capita income and Afghanistan’s currency had surpassed those of Pakistan.

“Sincere and immediate corrective measures are needed to improve the economic situation of the country,” he added.

Shehbaz said the opposition was prepared to sign a charter of economy with the government to take the country forward.

Prior to the session, it was evident that both the government and the opposition had opted for a conciliatory approach. Shehbaz conveyed as much and expressed his regrets over the rumpus during Tuesday’s session. “It is against the traditions of this house,” he said.

Citing his experience from his tenure in the Punjab Assembly, the PML-N president said: “Budgets cannot be discussed if the ruling party insists on conducting itself in this manner.”

He offered to extend all possible cooperation to the government if “it handled matters in the right manner”.

The PML-N president said the PTI had made tall claims of turning around the economy and bringing about revolution in the lives of the people but it had failed to deliver. He said the government’s policies had resulted in the closure of factories and industries rendering millions of people jobless.

Recalling the performance of the PML-N, Shehbaz said his party’s government had addressed enormous challenges including power shortage and terrorism, achieved a growth rate of 5.8& and brought down inflation to a record 3%.

On the construction of a dam during former military dictator Pervez Musharraf’s era, Shehbaz alleged that “neither a feasibility report nor legal permission for the project was sought”.

He said the former president had deceived the public by laying the foundation of the Bhasha dam.

He also blamed the PTI, which was then in the opposition, of paralysing the nation for over six months and damaging the economy.

“The PTI leaders were on their containers to sabotage our work,” he said.

Shehbaz cited the 2014 visit of Chinese President Xi Jinping during which the PML-N government had requested the PTI to end its protest. “They refused to entertain our request and that led to President Xi’s visit being postponed.”

On trade with India, the opposition leader mentioned the dealings in the textile industry. “We enjoyed healthy competition with India and were ahead in textile garments,” he said.

In the opening speech from the treasury benches, Minister for Power Omer Ayub asserted that the PTI-led government would leave no stone unturned in efforts to achieve the Rs5.5 trillion revenue target.

He said the PPP and the PML-N were to blame for Pakistan’s massive debt repayment challenge. “This year, we have paid Rs3 trillion only as interest on loans taken by the past governments.”

Criticising the economic performance of the successive PPP and PML-N governments, he said exports had remained stagnant all through the 10-year period. “They only implemented cosmetic measures and did nothing to actually stabilise the economy,” Ayub added.

“Unlike them, our government is working to introduce long-term and sustainable changes. This is an arduous task but with the prayers of the people, this honest leadership will transform Pakistan for the better.”

PM to be briefed on Rawalpindi mega projects