Despit­e team India's win, the Bollyw­ood star is seen in an adorab­le video that is going viral across the intern­et
By Entertainment Desk
Published: June 18, 2019
Tweet Email 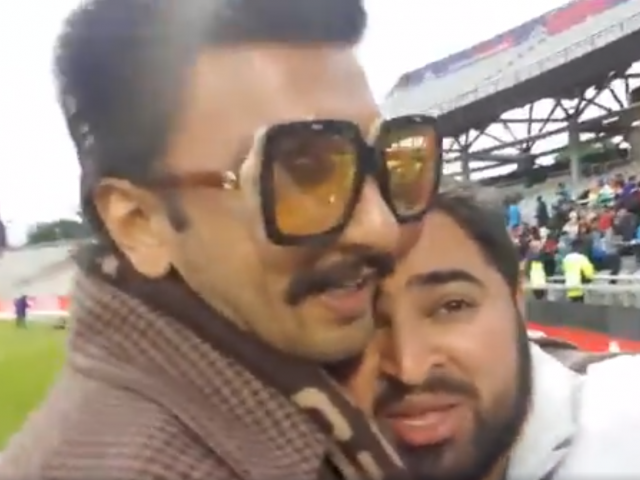 Ranveer Singh is winning hearts once again. In a viral video, the Bollywood star is seen consoling an upset Pakistani fan and telling him not to be disheartened by the nation’s upsetting loss against India in the ongoing World Cup.

The neighbours emerged victorious during the highly anticipated India vs Pakistan match at Old Trafford on Sunday. With this, the Indian cricket team has taken their winning streak in World Cup matches against Pakistan to 7-0, reported India Today.

Needless to say, Pakistani fans were certainly disappointed with the way the game played out. Ranveer, who was watching the match at the stadium, consoled one such fan after the neighbouring country’s loss and a video of the same is doing the rounds on social media.

The Pakistani fan named Aatif Nawaz, a comedian based in London, posted the video on his Twitter where Ranveer can be seen consoling him, “Put it there man, put it there,” as he hugged him.

“There’s always next time!” he continued. “Don’t be disheartened, you played well. Boys are dedicated, committed, professionals and they will be back.”

#ranveersingh with a Pakistani fan. He is so sweet ❤

Aatif captioned his tweeted “Indian fans are nice”, after posting the heartfelt show of affection from Ranveer.

And people seemed to be truly touched by the Bollywood star’s gesture in the face of the devastating lost, relaying messages of thanks via Twitter.

The Padmaavat star, who is a known cricket lover, was a well-loved celebrity attending the match and was seen enthusiastically cheering on his country’s team.

I've been a die-hard fan of Indian cricket since childhood. Invested so much emotion into our beloved team. Willing and wanting them to be the undisputed best in the world. And then, there was VIRAT KOHLI. pic.twitter.com/tXPNw0le60

This just might be our favourite picture from IndvPak match today! #RanveerSingh and #ZainabAbbas posing together for a selfie with #WasimAkram photobombing the two!

As for his outfit choice, we all knew Ranveer would wear something a bit kooky but no-one seemed to mind.

We know one thing is for sure, Ranveer made many other fans feel better too with his kind gesture after Pakistan’s loss.

6 celebs who are comfortable in their own skin