500 of 700 RO Plants are lying non-functi­onal and no one has been held respon­sible, says GDA MPA
By Hafeez Tunio
Published: June 18, 2019
Tweet Email 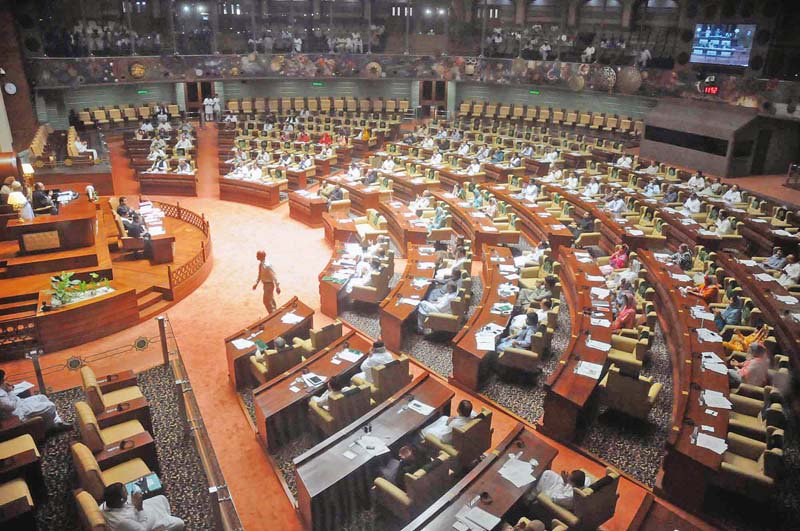 KARACHI: The post-budget session of the Sindh Assembly on Monday was dominated by issues of safe drinking water and sanitation. Opposition members from the Pakistan Tehreek-e-Insaf (PTI), Muttahida Qaumi Movement-Pakistan (MQM-P) and Grand Democratic Alliance (GDA) complained about the provincial government’s failure in dealing with these problems.

“Sindh government has spent around Rs7 billion on 700 RO [reverse-osmosis] plants to ensure the provision of potable water to people in Thar and its adjoining areas. More than 500 RO Plants are lying non-functional,” said GDA MPA Razzaq Rahimon, in his budget speech. He added that the contractors who provided the substandard RO plants are still at large and no one has been held responsible for this scam.

Rahimoon criticised the Pakistan Peoples Party (PPP) government for allocating the budget only on paper and providing no relief to the populace. “Everyone sitting on treasury benches is lauding the performance of the CM and the government for presenting the budget for the year 2019-20, but most of the MPAs are mum when it comes to utilisation of funds,” he said. He added that around Rs252 billion were allocated for development funds in the current fiscal year which is going to end on June 31, but government has hardly spent Rs75 billion of the funds.

“In every speech, the PPP ministers and MPAs are criticising the PTI government for not releasing funds. Please let us present a progress report in this House about your own funds, which you failed to spend,” he said.

Referring to the budget book, Rahimoon said that the provincial government had victimised political opponents by not allocating funds in their constituencies. “Not a single school, road, hospital or maternity home has been allocated funds in my constituency. Does this not fall in this province,” he asked.

Wasim Qureshi of MQM-P called the budget a jugglery of words and presented some facts and figures on the outgoing year’s budget relating to water and sanitation schemes. He said that millions of rupees were earmarked for rehabilitation and remodeling of Hub Canal, Dhabeji and Pipri pumping stations, the funds were released, but not a single penny was spent on them. According to Qureshi, the people living in North Karachi and West district spent their entire Ramazan searching for drinking water, but all in vain.  “The local government minister had earlier announced to tender in his resignation if he failed to resolve the issue. It is high time that he live up to his promise and step down as he has completely failed to deliver,” he remarked.

Bilal Ghaffar of PTI focused on the human development indicators to assess PPP government’s performance in Sindh over its 11-year rule. “The situation is deteriorating with each passing day.  The latest research reports suggest that 48% of Sindh’s children suffer from stunted because of malnutrition,” he said, adding that 400,000 children were out of schools.

He asked the government to fill the vacant posts of doctors and teachers in the province as thousands of hospitals and basic health centres had been deprived of doctors and paramedics and a large number of schools lack teaching staff.  The PTI MPA lashed out at the Sindh government for failure to resolve water and sanitation issues which are basic human rights.

Dr Sohrab Sarki of the PPP waved a progress report in the House, challenging the narrative of the opposition. “The PPP government has set the precedent of development in each sector,” he said, citing the example of the National Institute of Cardio Vascular Diseases and its state-of-the-art centres in all districts where free treatment was being provided to patients without any discrimination. “I ask our opposition MPAs to visit Sindh Institute of Urology and Transplantation (SIUT) Sukkur which is being run with the financial support of Sindh government,” said Sarki, adding that Sukkur IBA, Jacobabad Institute of Medical Sciences and Gambat Institute of Medical Sciences were operating with the support of the incumbent government.

Ghazala Siyal of PPP also criticised PTI and other opposition members and invited them to visit various areas of Sindh and review the provincial government’s performance. “Sindh is the only province which has produced its own 660 MW electricity from coal,” she said, lauding the Sindh government for allocating funds and giving priority to the education sector. “We welcome the chief minister’s decision to give cash prices to students who secure A-1 grade in SSC and HSC,” he said.  After the speeches on budget, Speaker Agha Siraj Durrani adjourned the session till today [Tuesday].

PTI leader Khurram Sher Zaman on Monday submitted a resolution in the provincial assembly condemning a move by the Sindh government to declare the chamber of Sindh Assembly Speaker Agha Siraj Durrani a ‘sub-jail’.

As the session started with Speaker Agha Siraj Durrani in chair, Zaman attempted to speak on this issue, but the speaker did not allow him.  “I want to move a resolution,” Zaman said.

Responding to him, Durrani said, “This is a budget session and we are here to discuss it. No one is allowed to move a resolution”.

Last year, the National Accountability Bureau (NAB) initiated an investigation against Durrani, a PPP leader, for possessing assets beyond his income. He is currently in the custody of the anti-corruption body in connection with the graft case. “Declaring the Sindh Assembly a ‘sub-prison’ is a disgrace to the assembly,” said the resolution. PTI’s resolution also demanded that the Sindh government immediately withdraw its decision in this regard.