Defiant lawyers burn copies of references during protest outside SC

Defiant lawyers burn copies of references during protest outside SC 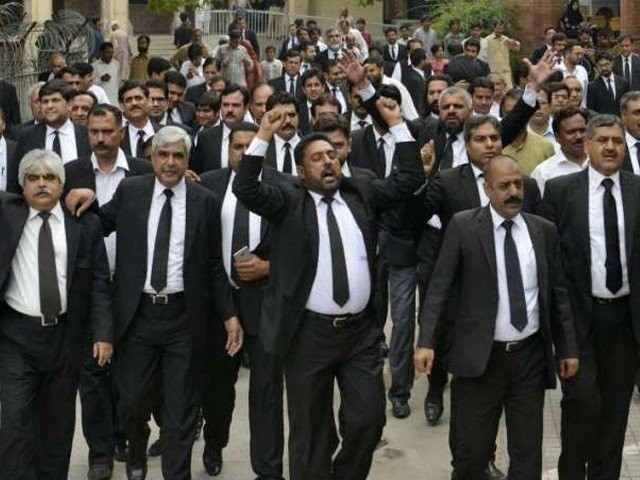 ISLAMABAD: Lawyers from bar councils across the country staged a protest outside the Supreme Court (SC) on Friday and burned copies of references filed by President Arif Alvi against apex court judge Justice Qazi Faez Isa and Sindh High Court judge Justice KK Agha over non-disclosure of foreign properties in their wealth statements.

The proceedings at the Supreme Judicial Council (SJC), which will be held in-camera, will commence at 2pm.

Interestingly, three SC judges who are members of SJC were part of the larger bench which had disqualified former prime minister Nawaz Sharif on account of non-disclosure of foreign assets in his nomination papers.

The council has already issued a notice to the attorney general of Pakistan (AGP) to decide the maintainability of presidential references against both judges.

According to Rule 10(2) of SJC Procedure, Inquiry, 2005, “The council may require the AGP or any other counsel to appear and assist the council in relation to smooth and efficient conduct of its proceedings.”

After obtaining legal assistance, if the council feels appropriate, it may issue show-cause notices to two judges seeking their explanation over the government’s allegations within two weeks. If their reply is unsatisfactory, the SJC may initiate trials against them. Some lawyers say that the matter may be adjourned for a couple of months as summer vacations are continuing.

The SJC is the only forum for initiating action against judges for misconduct. It consists of five top judges. Currently, Chief Justice of Pakistan Asif Saeed Khosa is the chairman of the council. Other members are: Justice Gulzar Ahmad, Justice Sheikh Azmat Saeed, Sindh High Court Chief Justice Ahmed Ali M Shaikh and Peshawar High Court (PHC) Chief Justice Waqar Ahmad Seth. CJP Khosa is retiring in December, while Justice Sheikh Azmat Saeed will retire in August. Justice Gulzar is the next chief justice of Pakistan. Justice Seth was heading the PHC division bench, which set aside the conviction of 74 individuals by military courts last year on the grounds of ill-will and lack of evidence. The CJP has already urged the lawyers to repose trust on judges in this matter.

Interestingly, all top superior court judges are the beneficiary of previous lawyers’ movement. Either they were restored or were appointed after the movement.  If 107 judges were not removed through the July 31, 2009 judgment, the situation might have been different in the courts.