Midfie­lders one of four co-captai­ns as team takes on Thaila­nd
By AFP
Published: June 10, 2019
Tweet Email 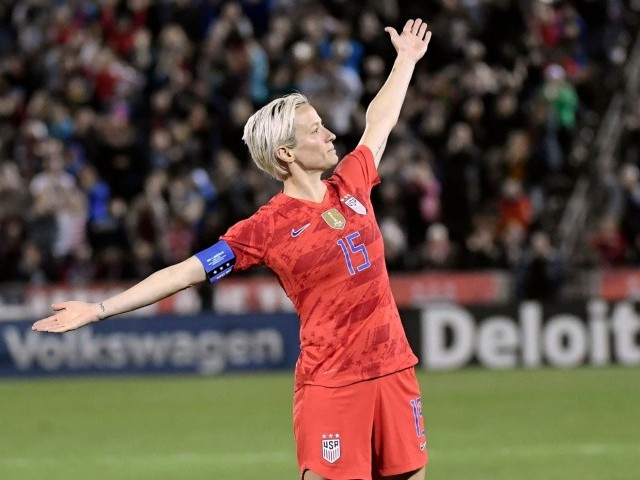 STAND OUT MIDFIELDER: Rapinoe, who will be playing in her third World Cup, is an unmistakeable presence in the US ranks. PHOTO: AFP

LOS ANGELES: Fearless and ferocious, on and off the field, Megan Rapinoe will be one of the cornerstones of the United States dressing room as they chase a record fourth Women’s World Cup crown.

The 33-year-old attacking midfielder is one of the four co-captains of the American team, forming a brains trust alongside Carli Lloyd, Becky Sauerbrunn and Alex Morgan which has amassed around 750 caps between them.

Rapinoe, who will be playing in her third World Cup, is an unmistakeable presence in the US ranks, her shock of cropped, blonde hair making her instantly recognisable.

The veteran also stands out for her willingness to speak her mind, whether it’s leading calls for greater gender equality in the women’s game or supporting NFL quarterback Colin Kaepernick’s 2016 protests by kneeling during the national anthem in solidarity.

Rapinoe continues to speak out, even though those close to her, including her mother Denise, worry that she risks being penalised for her candour.

“My mum always says ‘Why does it always have to be you?'” Rapinoe told AFP. “But I have a big mouth and I am fine to use it.”

That sense of combativeness has been a hallmark of Rapinoe’s career.

The Seattle player has battled back from three serious knee injuries to earn 153 caps since making her international debut in 2006, scoring 44 goals in the process.

In 2012, she came out as gay shortly before playing a key role in the US women’s gold medal-winning campaign at the London Olympics, and has since fought tirelessly to promote the rights of the LGBT community.

She is also one of the leaders of the US women’s fight for pay equality. The US women’s team filed a lawsuit against the United States Soccer Federation in March accusing the organisation of gender discrimination.

“In every aspect of life, the more we can tackle the inequality from a lot a different angles, perspectives, different lanes the quicker we can rectify the problem,” Rapinoe said. “The incremental change that we’ve seen is not enough. I would like to see a major paradigm shift, a major overhaul to realise that there’s been such a lack of investment for all these years, such a lack of care and attention to the women’s game.”