The childr­en in Memon Mohall­a are afraid to go to a school that is being built in the middle of a gravey­ard. The...
By Liaquat Leghari
Published: June 9, 2010
Tweet Email 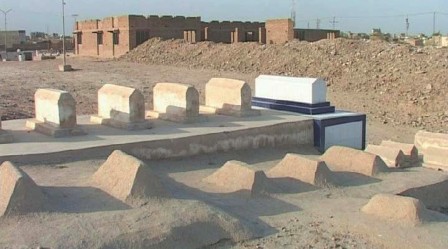 Mismanagement by the education department has resulted in the construction of a primary school in the middle of a graveyard in Memon Mohalla, Rohri, but construction stopped two years ago when residents filed a case in protest. PHOTO: SALAHUDDIN SAMEJO/EXPRESS

SUKKUR: The children in Memon Mohalla are afraid to go to a school that is being built in the middle of a graveyard.

The matter started after poor planning on the part of the education department resulted in the construction of the primary school inside the graveyard near Rohri; however, residents filed a case at the sessions court two years ago and managed to get a stay on construction until the court’s final verdict.

Many residents had protested and threatened to keep their children at home if the authorities insisted on building the school on their ancestral graves.

A resident of Memon Mohalla told Express News that the graveyard is located at a small hill outside their village. “Building a school in this location will never be successful,” he believed.

“There is no reason why this school should be made here.”

Even EDO Education Rohri Nawab Ali Channa agreed that the location of the school will have a negative impact on the children. According to Channa, the project started in 2006 and the reason why this location was chosen was they were short on land. On the other hand, EDO Education Sukkur Jia Ram Das refused to comment on the issue.

When the Express team visited the village, they found that it appeared to have plenty of space on which the school could have been built.

Some people have, however, illegally occupied government land in the vicinity that could have been cleared for the purpose.

Memon Mohalla is in dire need of a primary school as there are no schools in adjacent villages.

It has been two years since the children attended school and they are wasting time as the authorities fail to decide on an alternative arrangement. Thousands of rupees allocated for the project are also going to waste as construction could not go beyond five rooms.

The Syed family in the village filed the case, claiming that they inherited this land and it holds the graves of their ancestors. They said that several graves were destroyed when the school was being built and they cannot let that happen anymore.

The parents who are more determined regarding their children’s education have been sending them to a school located far from the village. Most parents meanwhile are not encouraged to send their children to school since there are none in the vicinity.

Memon Mohalla is famous for its annual Ashura procession.

‘Doctor killers will be caught within 24 hours’