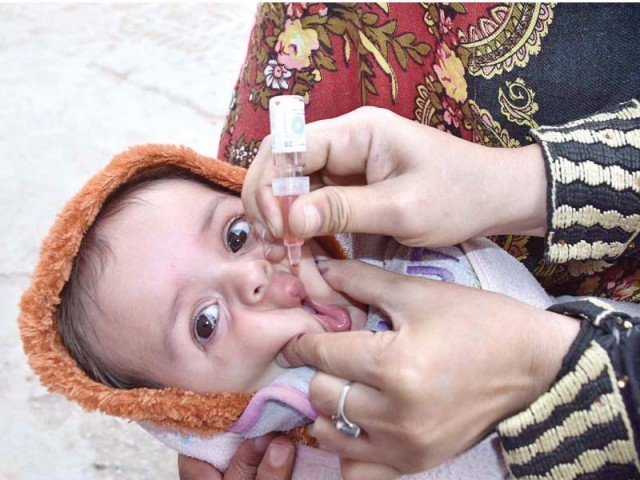 RAWALPINDI: The field staff is being prepared and other preparations are also underway for polio drive in five tehsils of district Rawalpindi.

The six day drive would commence from June 17, during which some 731,122 children would be vaccinated in Rawalpindi, Taxila and Gujjar Khan.

He said that the field staff was performing polio vaccination duties responsibly and the results were satisfying. “No polio virus was detected in environmental samples tests conducted by the World Health Organisation (WHO),” Dr Rashid Khan said.

Polio vaccination campaigns are done in continuation to completely uproot the poliovirus from the country.

Punjab government has suspended summer vacations of school teachers, headmasters and principals asking them to keep the schools free of dengue larvae.a

The step follows sudden spike in number of dengue patients. The ministry has issued orders to conduct anti-dengue drive in 52,000 government schools and 65,000 private schools on regular basis during the summer vacations.

The ministry has further issued a seven point SOP in this regard while the Punjab Education and Schools Director Instruction Abdul Qayyum has issued directions to educational officers, school heads and district administration to strictly comply with SOPs issued. He further instructed to send photos, as mentioned in SOPs, to the ministry on regular basis through Whatsapp.

Further, the school heads have been directed to ensure clean surroundings within and around their schools.

Meanwhile, the teachers’ organisations have strongly reacted to cancellation of summer vacations.

The representatives of teachers said that the decision was unjust. The teachers also have some family commitments, they said.

Subsequently, the officials from education department told teachers would be deployed turn-wise who would ensure implementation on SOPs of dengue campaign. They said the campaign would continue until August 14

The Rawalpindi district authorities and the district health department have been directed to expedite and expand their anti-dengue drive in the area after surveillance teams found as many as 215 houses ‘positive’ for the mosquito-borne virus.

On the directions of Rawalpindi Deputy Commissioner Ali Randhawa, the district health officials have formed different dengue surveillance teams who have been tasked with seeking and destroying the dengue larvae as well as informing the public during their survey regarding the precautions which can be taken against the virus on a regular basis.

Sanitary Patrol officials including Qamar Mahmood, Mohammad Abrar and Faizan Abbasi have launched indoor and outdoor surveillance in different areas of Union Council 17. The teams have warned the people to drain all pools of stagnant water to curtail the growth of dengue larvae..