Over 5,000 cases of XDR typhoi­d have been report­ed in Sindh to date
By Press Release
Published: May 29, 2019
Tweet Email 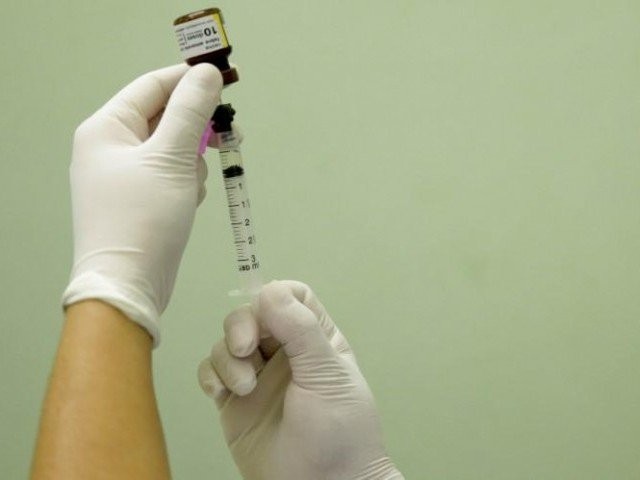 Over 5,000 cases of XDR typhoid have been reported in Sindh to date. PHOTO: FILE

KARACHI: Children in the Lyari neighbourhood of Karachi, one of the areas worst-affected by the typhoid outbreak in Sindh, are receiving their first dose of the typhoid conjugate vaccine (TCV), the latest vaccine to be included in Pakistan’s routine immunisation programme.

Staff from the Aga Khan University, in collaboration with the Sindh government, will inoculate over 100,000 infants and children – between the ages of six months and 15 years – by administering the vaccine at public and private schools and hospitals located in one of the city’s most densely populated towns.

“This is the first step in a mass immunisation campaign for Sindh,” said Sindh health minister Dr Azra Fazal Pechuho. “The vaccine is the most effective way to curb new cases and to protect children from a disease which is becoming increasingly expensive and difficult to treat.”

Pakistan is the first country among low-income nations eligible for funding from GAVI – a global, public-private partnership committed to increasing access to immunisation – to include TCV in its nationwide schedule of vaccines against 11 preventable diseases.

The decision is in line with the country’s commitment to end the outbreak of water-borne and communicable diseases in its efforts to meet Goal-3 of the Sustainable Development Goals.

“Deaths and complications from typhoid were rare over the past 15 years but the ongoing outbreak has put an unprecedented number of children at risk,” said Farah Qamar, an associate professor in paediatrics and child health at AKU. “Efforts are under way to address the root cause of the outbreak – failings in our water and sanitation system – but in the meantime this vaccine represents the best way to save lives.”

Researchers from AKU will analyse data from the Lyari drive to understand factors determining the acceptability and efficacy of the vaccine which, in turn, will enable its successful rollout across the country from October 2019.

The World Health Organisation (WHO) has disclosed that over 5,000 cases of XDR typhoid have been reported in the province to date. The scale of the outbreak led the Sindh government and private sector partners, such as Aga Khan University and the Bill and Melinda Gates Foundation, to launch an emergency vaccination drive in Hyderabad in January 2018.

Faculty and staff at Aga Khan University’s microbiology laboratory first detected the typhoid outbreak in blood culture tests from Hyderabad in October 2016. They collaborated with epidemiologists and infectious disease specialists from the varsity’s department of paediatrics to bring the matter to the attention of the local government, the WHO, the US National Institute of Health, the Sabin Vaccine Institute and the UK-based Wellcome Sanger Institute.

EPI to pay parents to get children vaccinated

Ever since, the varsity’s researchers and its partners have collaborated on a number of studies to understand the genetic make-up of the typhoid strain, to ascertain risk factors for its geographic spread and to assess the safety and efficacy of TCV in an emergency outbreak situation.

Data and policy implications stemming from these studies were shared with the Drug Regulatory Authority of Pakistan and the federal government’s National Technical Advisory Group. This led to a successful application for funding from GAVI and the Bill and Melinda Gates Foundation, resulting in the permanent inclusion of TCV in the country’s nationwide immunsation programme. The move is hoped to help stop the spread of a preventable disease.

Man murders HIV-positive wife in Shikarpur accusing her of cheating