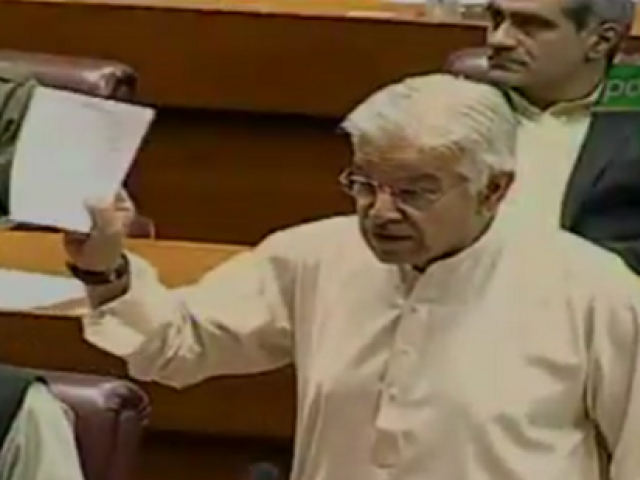 ISLAMABAD: Sunday’s North Waziristan incident reverberated in the National Assembly on Monday, with the opposition calling for a resolution of former tribal areas’ problems through political process

The combined opposition also staged a walkout from the house without hearing the government’s stance.

A group of people – led by two lawmakers belonging to the Pashtun Tahaffuz Movement (PTM) – assaulted a military check post to forcibly secure release of a terrorists’ facilitator in North Waziristan district, triggering a fire exchange, the military said in a statement on Sunday.

According to a local count, 10 attackers had lost their lives in the assault which had also left 15 people, among them five soldiers, wounded – some of them seriously.

Taking the floor, Pakistan Muslim League-Nawaz’s (PML-N) Khawja Asif said the state has made mistakes in every era as it should play the role of a mother.

“There are people across the border, who are puppets in the hands of our enemies. If fault lines are not addressed, they can jeopardise integrity of the country,” he said.

The former foreign minister said erstwhile tribal areas were the most affected in the war against terrorism. “We damaged their traditions and identity through our proxy wars. It is our responsibility to bring them to the mainstream.”

He said the former tribal areas have now a new identity, constitutionally and legally, adding that merger of tribal areas into Khyber-Pakhtunkhwa (K-P) was based on a report submitted by a committee headed by a PML-N leader Sartaj Aziz.

Asif said the cost of pushing tribal areas into war was unimaginable and it will have to be borne by generations. “We should hold political communication with the erstwhile Fata people. I will not go into the details of yesterday’s incident but any person’s death on our soil is unfortunate,” he added.

He said names of two MNAs were being mentioned in connection with the incident. “It is reported that one MNA allegedly involved in the attack is now under arrest and the other has fled. The issues of Balochistan and Fata should be solved politically. PM’s statement on the issue is inevitable,” he added.

Responding to Khawaja Asif, Federal Minister for Communication Murad Saeed said wrong policies of the past governments have made people of former tribal areas homeless.

“All those responsible for underdevelopment of tribal districts should be held accountable.”

Hitting out at the Pakistan Peoples Party (PPP) which on Sunday condemned the Waziristan firing, he said the PTM was formed after extrajudicial killing of a tribal man, Naqeebullah, allegedly by former SSP Rao Anwar; however, it was PPP Co-chairman Asif Ali Zardar who declared Rao Anwar ‘a brave kid’.

“I ask: Where is Rao Anwar today? He is the one who killed Naqeebullah Mehsud. I want to tell [PPP chief] Bilawal that Rao Anwar is brave boy of you father and it was the martyrdom of Naqeeb that caused PTM to come into existence,” he said. Saeed said footages of Waziristan incident are available.

Khawaja Asif has a history of being a liar. Today, on the floor of the house, he again lied claiming that I am a partner in the TV channel that did prgmme against Chairman Nab.I do not own even a single share in any TV channel let alone owning one. Take your words back khwja Asif

Saeed also criticised the Pashtoonkhwa Milli Awami Party (PkMAP) chief Mehmood Khan Achakzai and PTM leader Mohsin Dawar and said they even opposed installation of barbed wires on the borders with Afghanistan as, according to the minister, they do not want Pakistan’s borders to become safe.

“The nexus between [Indian] RAW and [Afghan] NDS carries out terrorist acts in Pakistan from Afghanistan. Mohsin Dawar should explain his relation with Afghan secret agency NDS and if he does not, I shall disclose and tell about him. Bashing of the Pakistan Army should stop,” he said.

During Murad Saeed’s speech, the opposition members started raising slogans and leaving the house. The PML-N’s MNA Abid Raza Kotla objected to Saeed allegations against Mohsan Dawar and said Dawar is a member of the house. “This can happen to you tomorrow,” he said.

Shortly after the opposition’s walkout, the speaker adjourned the session till 3:00 pm today (Tuesday).