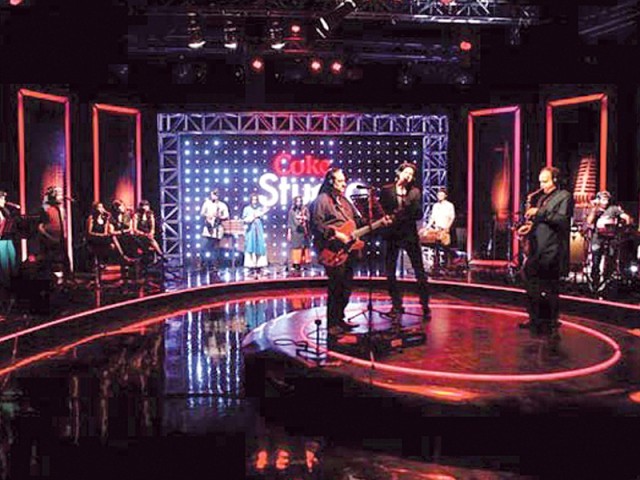 Despite the incorporation of some traditional instruments, the overall performances remained ordinary and unimpressive. PHOTOS: FILE

After making an unexpectedly good debut, “Coke Studio @ MTV” plummeted in its second episode since it departed from its hitherto traditional melodies, with the performers ultimately creating typical Bollywood music. Despite the incorporation of some traditional instruments, the overall arrangement by the producer   remained ordinary and unimpressive.

One could see that the instrument players tried to imitate their counterparts in the Pakistani “Coke Studio”. The guitarist, who seemed overly inspired by Asad Ahmed – founding member of the rock band Karavan – failed to do justice to the instrument.

To add to the disappointment, their backing vocalists, who are supposed to provide vocal harmony to the lead vocalist’s voice, had no noticeable contribution to the music. The only highlight of the show was when Leslie Lewis came in front of the camera to play the acoustic guitar.

“Path Kai Paare Hui” is an ancient song sung in praise of king Chau Lung Skhapa, who crossed the Chinese border to enter Assam. The song, which centres on Skhapa’s journey, starts with a very grand instrumental melody full of Shehnais and trumpets. Apart from some good traditional Indian instrumental, there is nothing unique in the overall structure of the song. Although Khagen Gogoi came as a surprise package in the first episode, he failed to leave his mark with this song. (5/10)

Essentially a medley of four indigenous songs from Jharkhand and Bihar, “Dheere Dheere” describes the different experiences that a woman goes through in her life. The high notes of the talented vocalist were certainly memorable. However, after an impressive beginning, the medley turned into a typical item number when the electric guitar was forced into the song giving it a rather clumsy rock beat. Despite the presence of great vocal talent and several instrument players, Lewis succeeded in turning a folk tune into merely another Bollywood song. (6/10)

Originally composed by Shankar Mahadevan, “Mehr-maa”, meaning beloved, is a sufi song in which a girl compares her love for her man to the love of God. The song started with a nice acoustic sound and as soon as Akriti Kakar began singing, she took the number to the next level. Kakar’s vocal prowess is unmatchable and if given the due projection, she could be the next Shreya Ghoshal (leading Indian playback singer) of Bollywood. Mahadevan, who joined in the second half, balanced out the duet with his typical alaaps, making it a memorable performance, even though the song itself didn’t offer anything unique musically. (7/10)

“Jiya Laage Na”, an original composition by Lewis, is a very typical melody fused with other languages. Although, Dalton, Gogoi and Mahadevan also contribute to add diversity and uniqueness, unfortunately the final performance turned out to be a very run-of-the-mill effort, robbed of the exclusivity that Lewis had hoped for. The typical alaaps by Mahadevan remind one of Colonial Cousins – a band formed by Indian duo Hariharan and Lewis – whose mainstream presence has faded away with time. (5/10)

“Allah Hi Reham” is a sufi composition by Mahadevan, Ehsaan Noorani and Loy Mendonsa which was originally sung by Rashid Khan for the film My Name is Khan. The song starts with the mellow sound of Sarangi complimenting the heavy vocals of Mahadevan but subsequently the song was not very different from the film’s version.  Although, it was expected that the studio would utilise the talent and natural ability of Mahadevan effectively, it ended up sounding monotonous. In fact it does even deserve a second listen. (5/10)

Adorn yourself with clay