Pragya Thakur says those callin­g Nathur­am Godse a terror­ist should instea­d look within­
By News Desk
Published: May 16, 2019
Tweet Email 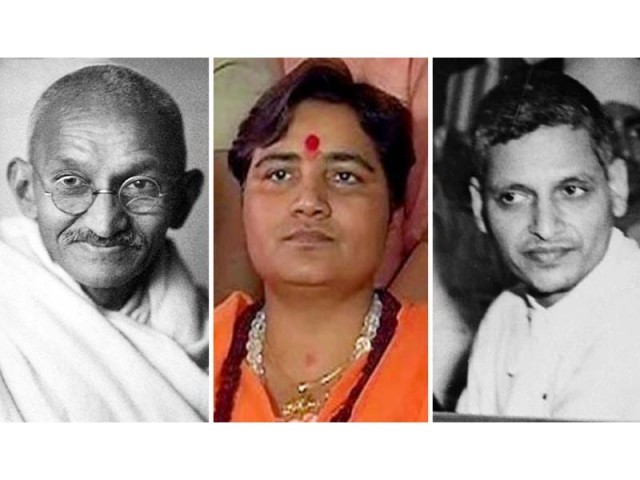 Pragya Thakur says those calling him a terrorist should instead look within. PHOTO: EXPRESS

“Nathuram Godse was a deshbhakt [patriot], is a deshbhakt and will remain a deshbhakt. People calling him a terrorist should instead look within, such people will be given a fitting reply in the election,” she said.

#WATCH BJP Bhopal Lok Sabha Candidate Pragya Singh Thakur says 'Nathuram Godse was a 'deshbhakt', is a 'deshbhakt' and will remain a 'deshbhakt'. People calling him a terrorist should instead look within, such people will be given a befitting reply in these elections pic.twitter.com/4swldCCaHK

Thakur, who is standing as the ruling party’s candidate in Madhya Pradesh’s Bhopal was asked to respond to an ongoing controversy over south superstar-turned-politician Kamal Haasan’s remark that “Godse was the first Hindu extremist of independent India”. She is the main accused in the 2008 Malegaon blast in which six people were killed and more than 100 injured.

Gandhi was gunned down in 1948 inside the compound of Birla House by Godse, an advocate of Hindu nationalism.

GVL Narasimha Rao, BJP on Pragya Singh Thakur's statement "Nathuram Godse was, is & will remain a 'deshbhakt": BJP does not agree with this statement, we condemn it. Party will ask her for clarification, she should apologise publicly for this statement. pic.twitter.com/yBEs8nQoWW

In a highly polarised campaign in Bhopal, the 49-year-old made controversial remarks like “cursing” Hemant Karkare, who died during the Mumbai attacks in 2008, and bragging about participating in the demolition of the Babri mosque in Ayodhya.

Meanwhile, Thakur’s spokesperson and BJP leader Hitesh Bajpai was quoted as saying that she had apologised for her remark.

Asked whom she had apologised to, Bajpai said: “That is not an issue, but she apologised and took back her statement.”

#WATCH Pragya Thakur on 'Godse is patriot' remark: "It was my personal opinion remark. My intention was not to hurt anyone's sentiments. If I've hurt anyone I do apologise. What Gandhi Ji has done for the country cannot be forgotten. My statement has been twisted by the media." pic.twitter.com/n6Ih6of1Qd