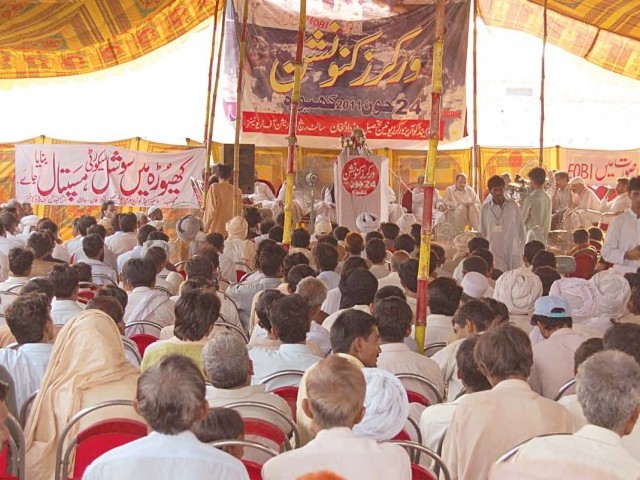 Labourers demanded their rights at a convention organised in Khewra on Friday. PHOTO: MUHAMMAD JAVAID

They work for peanuts in mines that have negligible safety measures, and they want the government to change things for the better.

Hundreds of labourers attended a labour convention here on Friday to discuss workplace hazards. They stressed for labour rights and better safety measures at workplaces.

The main objective of the convention was to mobilize labour to pressurize the government into accepting their demands.

Speaking at the occasion, Azmat Malik, representative of Muttahida Labour Federation Punjab, asked the government to announce a health policy for workers and ensure their safety at workplaces, particularly in mines. The labourers demanded the government to simplify Employees’ Old-Age Benefit Institution (EOBI) registration process and to announce a minimum wage policy for them like it did for the rest of government servants.

They were of the view that thousand of labours working in coal and salt mines are facing problems at the hand of Punjab Welfare Board and relevant authorities that had not registered them with EOBI. They said that a large numbers of labourers, incapacitated during work, were not being compensated.

“Cases are pending before the relevant authorities but Punjab government has failed to announce any compensation,” Malik said.

Pakistan Mineral Development Corporation General Secretary Mir Jaffar Ali said there are many factories around Khewra and the water is largely contaminated. The labourers are deprived of clean drinking water and are facing serious health hazards.

The convention was organised by the Mines and Queries Worker Union Tehsil Pind Dadan Khan and Salt Range Federation Trade Union in collaboration with Action Aid.