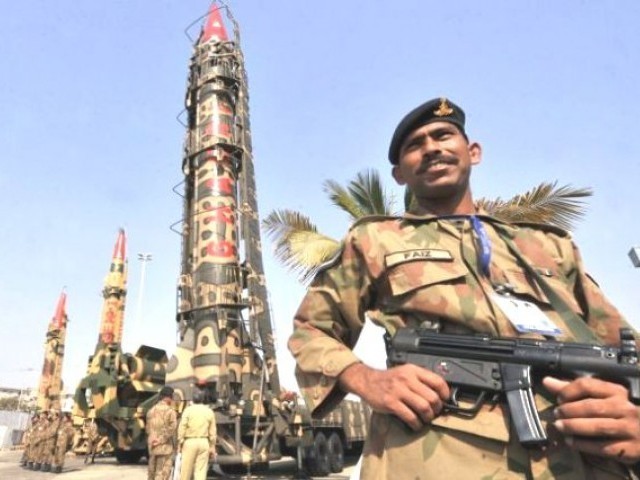 In 2018, Pakistan’s military expenditure was $11.4 billion, making it the 20th-largest spender globally. 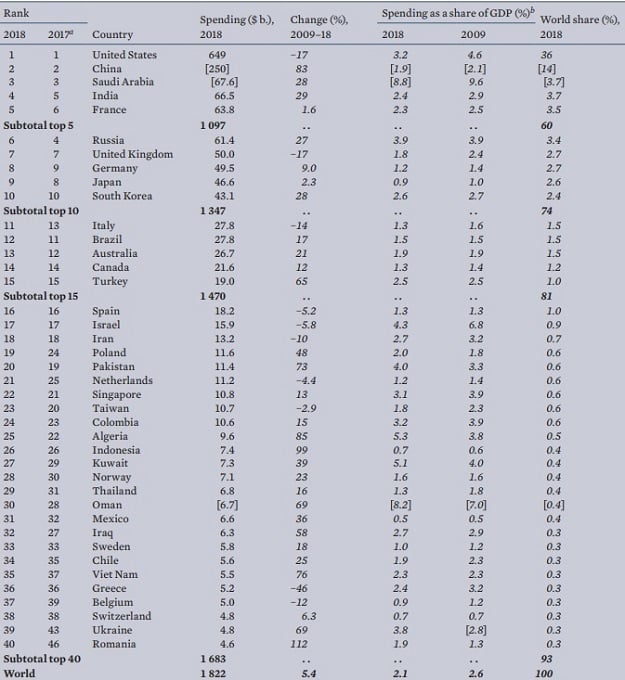 As per the SIPRI data, Pakistan is among the top 10 countries with the highest military burden. “A state’s military expenditure as a share of GDP — also known as the military burden — is the simplest measure of the relative economic burden the military places on that state,” the report explains. 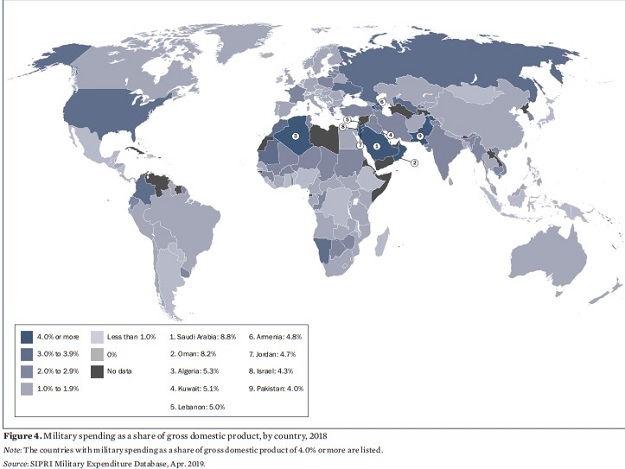 According to the Sweden-based research institute, India’s military spending rose in 2018 for the fifth consecutive year and was 3.1 per cent higher than in 2017.

“At $66.5 billion, India’s spending was 29 per cent higher than in 2009. Despite this rise, India’s military burden in 2018 was at one of its lowest levels since the early 1960s: 2.4 per cent of GDP compared with 2.9 per cent in 2009,” the SIPRI report states, citing rivalry with China and Pakistan as the reason for New Delhi’s rising military expenditure.

China, meanwhile, remains the world’s second-largest military spender, allocating $250 billion to the military in 2018, which accounted for 14 per cent of global spending.

“The annual rate of growth of China’s military spending has slowed steadily since it reached a post-2009 high of 9.3 per cent in 2013. The growth of 5.0 per cent in 2018 was the lowest annual increase since 1995. China has followed a policy of linking growth in military spending with economic growth. With its economic growth slowing in 2018 to the lowest level in 28 years, slower rates of growth in the coming years can be expected if China continues to follow this policy.”

“The increase was due to primarily to the rise in Chinese spending, which in 2018 accounted for 49 per cent of total spending in the region, compared with 31 per cent in 2009.”

Another key finding of the SIPRI report was that United States military spending has risen for the first time in seven years, reflecting the Trump administration’s policy.

At $649 billion, the US figure alone was as much as the next eight highest military budgets. “US military expenditure increased — for the first time in seven years— by 4.6 per cent in 2018. The USA remained by far the largest spender in the world, accounting for 36 per cent of global military spending in 2018.”

“The USA spent almost as much on its military in 2018 as the next eight highest spenders combined. However, its military expenditure in 2018 was still 19 per cent lower than its peak in 2010. The US government’s budget-adoption process has been particularly difficult during the 2010s, in the context of efforts to address the US deficit and balance the country’s budget. This has led to severe and antagonistic divisions in the Congress and between the Congress and the administration on the level of resources dedicated to the US military,” states the SIPRI report.

“The increase in US spending was driven by the implementation from 2017 of new arms procurement programmes under the Trump administration,” said Aude Fleurant, director of SIPRI’s Arms and Military Expenditure (AMEX) programme.

Overall, according to SIPRI calculations, worldwide military spending rose by 2.6 per cent to $1.8 trillion in 2018. This was the second year running the global figure has risen, bringing military spending to its highest level since 1988.