Quresh­i says the Great Wall of China has stood the test of time, much like the friend­ship betwee­n Pakist­an and China
By News Desk
Published: April 26, 2019
Tweet Email 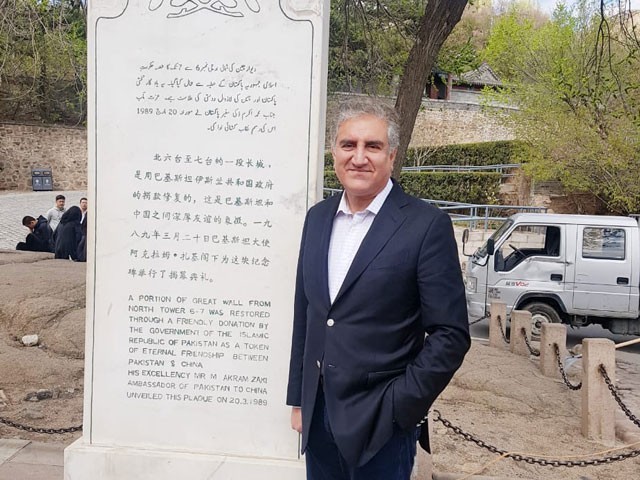 Qureshi says the ‘Great Wall of China’ has stood the test of time, much like the friendship between Pakistan and China. PHOTO: TWITTER

Foreign Minister Shah Mahmood Qureshi said the One Belt and One Road (OBOR) Initiative would eventually become a symbol of Pakistan-China friendship.

In his message on the social media website Twitter, Qureshi said it would be an icon for bilateral friendship since both Pakistan and China were charting new frontiers.

The Great Wall of China is a symbol of China’s triumphs and might. It has stood the test of time, much like the friendship between Pakistan and China. As we chart new frontiers the one Belt and Road Initiative will be the new symbol of our united triumphs and perseverance. pic.twitter.com/1Ky9xNjk5k

The foreign minister, who is in China as part of the Pakistan delegation attending China’s Belt and Road summit, hailed the Great Wall of China as a symbol of the country’s achievements.

He also shared a picture of his autograph with the words, “long live Pakistan-China friendship, the only iron brothers in the world”.

At the opening of the summit, Chinese President Xi Jinping sought to bat away concerns about his ambitious OBOR initiative.

According to him, the global infrastructure project would have “zero tolerance” for corruption and vowed to prevent debt risks.

Pakistan to begin talks with IMF from Apr 29