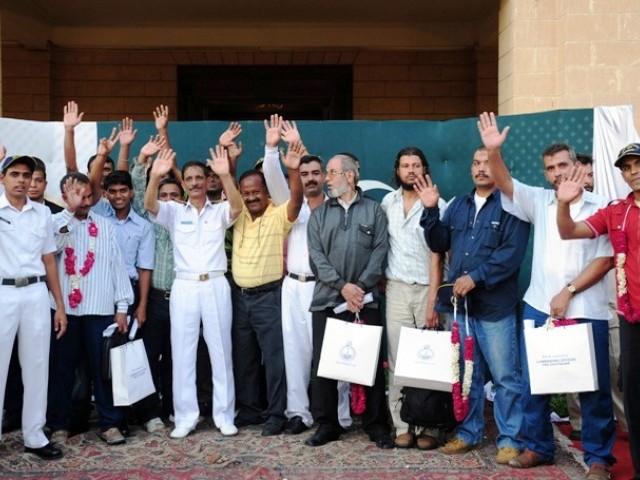 Crew of Egyptian-registered boat M.V. Suez who were held hostages by Somali pirates wave upon their arrival at the Pakistani port city of Karachi on June 23, 2011. PHOTO: AFP/FILE

It was a bitter-sweet homecoming for six Indian sailors who were reunited with their families on Thursday morning in the full glare of the media, following their ten-month ordeal at the hands of Somali pirates. Even though the Indian sailors were reassured by the presence of their families, the absence of any government official was quite conspicuous.

Older members of their families broke into tears at the Indira Gandhi International Airport at their sight as younger members carried placards that read ‘Thank you, Ansar Burney uncle, we love you’.

Hugging his three-year-old son, Ravinder Singh Bhulia, one of the released crew members who hails from Rohtak, said, “The Indian and Pakistani media helped us a lot. As far as the Indian government’s role in the release, I don’t want to comment on it”.

With tears rolling down her cheeks, his wife Champa said, “The pain will never go”.

Another released crew member Prashant Chauhan said, “I am very happy. I waited for this moment for 10 months”. “The Pakistan government has done a lot for us. Their ship Babur came to our rescue. We called up Indian ship Godavari a number of times but they never responded,” Chauhan said, adding: “We were chained and treated like animals.”

Senior Indian officials also thanked Pakistan for its help in the release of the sailors.

Appreciating Islamabad’s help in ensuring their safe return External Affairs Minister SM Krishna said, “We are relieved their ordeal has ended and they will be safely back with their families. We appreciate the help extended to them by the Pakistan Navy.” Krishna also said more concerted efforts were needed to tackle the threat posed by pirates. “Let us not forget that the ordeal of over 500 sailors from across the world, who are still in captivity of the pirates, is not yet over,” he said.

The Indian sailors recounted the horrors they faced during their 10-month captivity by Somali pirates who kept them in chains, often without food or water, and treated them “like animals”. Recounting his ordeal, Sharma said they starved for many days and on some days they just got water.

“We used to get boiled rice, spaghetti and potato once a week,” he said.

Satnam Singh was one of the six released Indian sailors rescued from the captivity of Somali pirates of the Gulf of Aden 10 months ago.

Satnam’s mother Surinder Kaur didn’t sleep the whole night. When she spotted her son alighting from the Emirates flight that rolled in from Dubai this morning, she could barely keep herself from sobbing out loud.

Satnam’s mother and father Shamsher Singh said they had lived in fear and desperation for over 10 months waiting for the news of their son. They said Satnam’s release from the clutches of the pirates was nothing short of a rebirth for him.

The 22-member crew of the ship had reached Karachi on Thursday evening, 10 days after they were freed after paying a ransom of $2.1 million, collected by NGO Ansar Burney Welfare Trust.

Five Pakistani sailors were rescued by Indian navy in March after their vessel was attacked off the coast of Kerala, in southern India, late last year. They have been housed at a police station in Mumbai since, awaiting clearance to return home. Their Iranian, Thai, Bangladeshi, Filipino and Turkish colleagues left India soon after the rescue.

“An assistant commissioner from the Pakistan High Commission (in New Delhi) visited the police station on Friday and interacted with the five sailors from his country,” Inspector MG Tope told the Press Trust of India. The news agency quoted an unnamed police source as saying that the Pakistanis were likely to be able to leave next week.

With additional input from the news wires