Treasu­ry lawmak­er chides GDA MPA for 'behavi­ng like a girl', says the AAG has been fired
By Hafeez Tunio
Published: April 18, 2019
Tweet Email 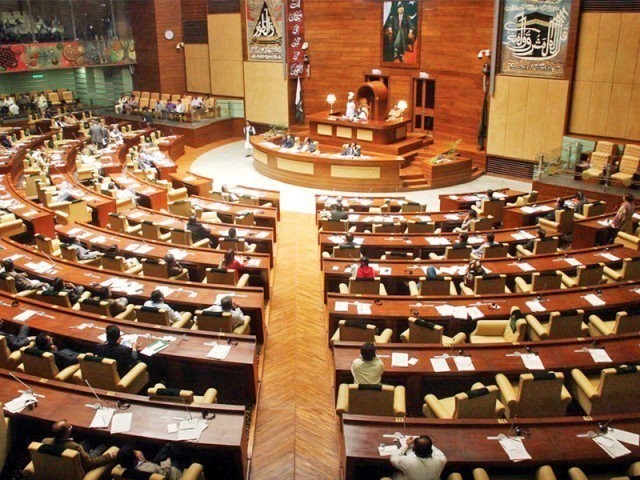 KARACHI: The decision of the ruling Pakistan Peoples Party to appoint an alleged “rapist” and “criminal” as an Additional Advocate-General (AAG) dominated the Sindh Assembly proceedings on Wednesday as Opposition MPA Arif Mustafa Jatoi questioned why such decisions were made.

Moving the call-attention notice, Jatoi, who belongs to the Grand Democratic Alliance (GDA), waved copies of the FIR, police investigation report and even the court’s order against Ali Gul Khaskheli, who is a former civil judge. The latter was dismissed from service by the Sindh High Court in July 2015 on grounds of corruption.

Jatoi referred to the general body meeting and resolution passed by Nawabshah District Bar Association in 2007 against Khaskheli. “The association took the initiative, following his attempt to assault a girl in his chamber,” said Jatoi. “Later the bar appealed to the higher courts to take notice and registered complaints against him, leveling serious allegations of corruption, misconduct and involvement in criminal cases,” he said, adding that the court had also ordered an inquiry against the civil judge and asked the Nawabshah SSP to investigate the criminal cases.

Jatoi read aloud the police investigation findings, which state: “It is submitted that Ali Gul Khaskheli is really a corrupt, defaulter, criminal, patharidar, supporter of land grabbers and a black sheep of the judicial department, who becomes an obstacle before officials in performing their duties in the maintenance of law and order, therefore, he should be accounted for according to the law.”

According to Jatoi, the sessions court had referred the matter to the Sindh High Court, which had in turn dismissed the civil judge from service. “I am amazed that the incumbent government has appointed the same person as an additional advocate general,” he said. “He is a rapist, a land grabber and a known criminal,” said Jatoi. “He had tried to rape a girl in his chamber. How can you appoint such a person on this coveted post?” questioned Jatoi, waving a copy of the appointment order issued by the law department on April 30, 2018. “You pay Rs560,000 as monthly salary to this criminal.”

Instead of giving a proper response, Minister for Parliamentary Affairs Mukesh Kumar Chawla took a jibe at Jatoi. “Don’t shout and behave like a girl in this House. If you want to say something, don’t look at the treasury benches and lose your temper,” he said. “Address the Speaker. We respect you because of your family, otherwise you are nothing,” Chawla continued, adding that the government had de-notified its order by removing Khashkeli from the job. “We withdrew our decision when came to know about the cases against him.”

Incensed by Chawla’s remarks, the GDA’s Nursat Seher Abbasi and other female lawmakers of the Opposition, started to protest.

Tendering an apology, Chawala said, “I am sorry. I am taking my words back.” He then sent the dismissal letter of the AAG to Speaker Agha Siraj Durrani who read the notification aloud. “The CM has dispensed the services of Ali Gul Khaskheli.”

Members of the Opposition protested and staged a walkout after the Speaker refused Pakistan Tehreek-e-Insaf MPA Khurrum Sher Zaman’s request to speak on a point of order.  Zaman had requested the Speaker for time and said, “I want to say something on an important issue.”

The Speaker, however, said that he would not allow anyone to speak until the agenda was finished. Zaman started to protest.  In response, Durrani said, “I will not take dictation from anyone here. I will run the session as per the rules. You can do whatever you want.”

Zaman and other Opposition members left the House, shouting slogans against Durrani. As they left the session, the Speaker said, “There is nothing but mere allegations against me. They have trapped me in the NAB’s net. I don’t know what they want further.”

During the session, PTI MPA Shahnawaz Jadoon raised the issue of solid waste piling up in District West. “Students can’t enter schools and people are unable to go inside mosques and other places of worship,” he lamented. “The streets are filled with garbage as the solid waste management authority has stopped its operations in the district from the last few weeks.”

Local Government minister Saeed Ghani said that it was a genuine complaint as the Chinese company that was supposed to lift the solid water had stopped working in the district. “They were supposed to hire people and bring machinery to lift garbage, but this has never happened,” said. “We are not going to cancel the contract and award it to another company,” he continued, adding that more than 30 dumpers have been moved in the district to lift the garbage.

The Assembly also adopted a resolution, landing the efforts of the PPP and its government for initiating the coal power project in Thar. Later, the speaker adjourned the session till today (Thursday).