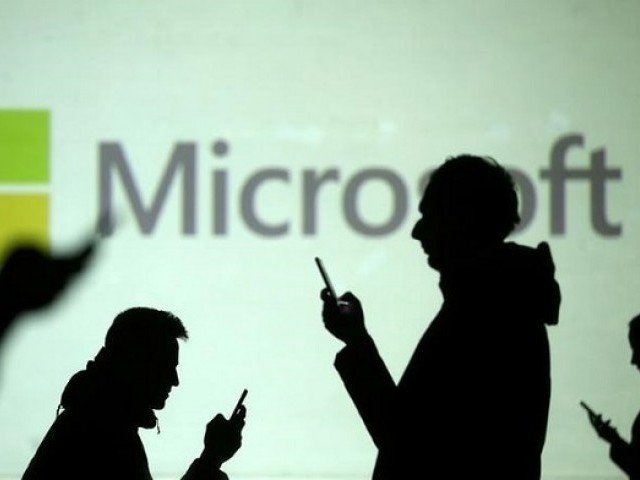 Silhouettes of mobile users are seen next to a screen projection of Microsoft logo in this picture illustration taken March 28, 2018. PHOTO: REUTERS

BEIJING: Microsoft has been collaborating with researchers linked to a Chinese military-backed university on artificial intelligence, elevating concerns that US firms are contributing to China’s high-tech surveillance and censorship apparatus.

Over the past year, researchers at Microsoft Research Asia in Beijing have co-authored at least three papers with scholars affiliated with China’s National University of Defence Technology (NUDT), which is overseen by the Central Military Commission.

The research covers a number of AI topics, such as face analysis and machine reading, which enables computers to parse and understand the online text.

While it is not unusual for US and Chinese scholars to conduct joint research, Microsoft’s work with the military-backed NUDT comes amid increasing scrutiny around China-US academic partnerships, as well as China’s high-tech surveillance drive in the northwest region of Xinjiang.

“The new methods and technologies described in their joint papers could very well be contributing to China’s crackdown on minorities in Xinjiang, for which they are using facial recognition technology,” said Helena Legarda, a research associate at the Mercator Institute for China Studies, who focuses on China’s foreign and security policies.

“Many of these advanced technologies are dual-use, so they could also contribute to the PLA’s (People’s Liberation Army’s) modernisation and informatisation drive, helping the Chinese military move closer to the 2049 goal of being a world-class military,” she added.

In an email, a Microsoft spokesman told AFP that the company’s researchers “conduct fundamental research with leading scholars and experts from around the world to advance our understanding of technology.”

In each case, the research “fully complies with US and local laws” and is published to “ensure transparency so everyone can benefit from our work,” he said Thursday.

The growing concerns around human rights violations in Xinjiang have also added pressure to US firms with business in the region, where some one million Uighurs and other mostly Muslim Turkic language-speaking minorities are held in re-education camps, according to a UN panel of experts.

In February, US biotechnology manufacturer Thermo Fisher announced it would stop selling equipment used to create a DNA database of the Uighur minority to China.

That same month, a security researcher exposed a massive database compiled by Chinese tech firm SenseNets, which stored the personal information and tracked the locations of 2.6 million people in Xinjiang.

At the time of the data leak, Microsoft was listed as one of SenseNets’ partners. The company declined to comment.

But experts have also stressed that, in the case of NUDT, Microsoft’s co-published work is open and publicly accessible.

“The authors are basically sharing with the rest of the world how to replicate their approaches, models, and results,” said Andy Chun, an adjunct computer science professor at the City University of Hong Kong.

That allows others to potentially “build upon, enhance and expand this research,” he said.

Microsoft Research Asia also tends to focus on long-term research or projects that are not immediately transferable to applications, such as those that could be used to monitor or suppress a population of people, pointed out Yu Zhou, a professor at Vassar College, who studies globalisation and China’s high-tech industry.

And while such concerns are certainly valid, it may be difficult for AI researchers to avoid China, she told AFP.

“It’s a field where Chinese researchers have made quite a lot of advancements, and they are generating data which is the raw material for this industry — so how are you going to avoid that?”