Fire breaks out at PM Secretariat

Fire breaks out at PM Secretariat

Offici­als suspec­t it was an accide­nt caused by a short circui­t
By Our Correspondent / Photo: Zafar Aslam
Published: April 9, 2019
Tweet Email 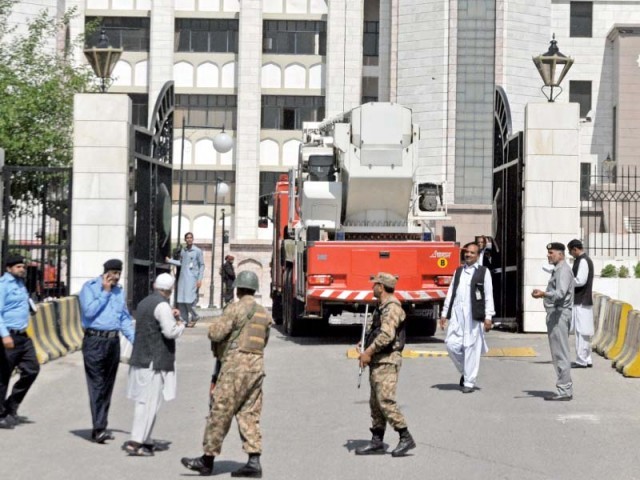 ISLAMABAD: A fire broke out on the sixth floor of the Prime Minister’s Secretariat on Monday which was quickly extinguished. Officials stated that the possible cause of the fire was a short circuit.

Firefighters said that the fire was detected after smoke filled a washroom at around 1pm on the sixth floor of the secretariat.

Officials in the Secretariat immediately called the police, the district administration and the fire brigade. By the time the firefighters of the federal capital reached there, the entire floor was full of smoke.

Thanks to the fire prevention mechanisms in the complex and the swift response of the fire brigade, firefighters were able to control the fire within 30 minutes.

Officials said that there were no human casualties while no records were damaged due to the fire either.

Police sources said that initial inspection of the site shows that there were some concealed wires inside the walls of the washroom which had short-circuited from the duct on the third floor. This, in turn, affected the wires located on the sixth floor.

However, officials added that they were able to control the fire within 30 minutes after the firefighters arrived at the scene.

Officials added that they were still looking for clues.

Meanwhile, the Special Assistant to the Prime Minister on Media Affairs Yousaf Baig Mirza explained that the fire appeared to have been caused by a short-circuit.

However, he said that details can only be provided after investigations into the incident are completed.

Mirza said that PM Imran Khan was present in his office at the time when the fire broke out and that he subsequently left the office after inquiring about the nature of the fire.

He further explained that they resorted to evacuating the building owing to the intensity of the fire.