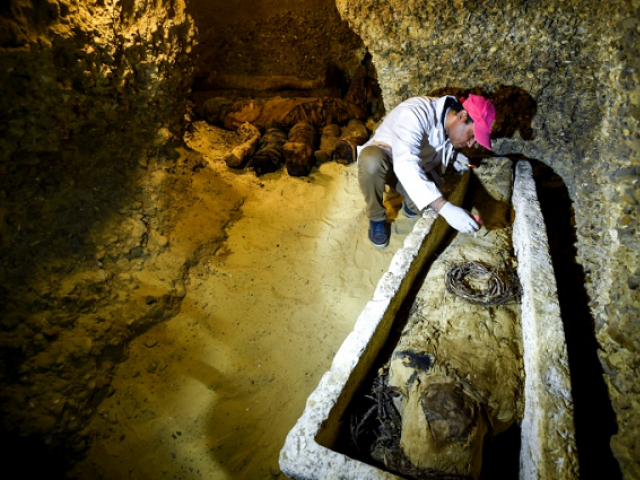 An archaeologist brushes a newly-discovered mummy laid inside a sarcophagus, part of a collection found in burial chambers dating to the Ptolemaic era (323-30 BC) in February 2019. PHOTO: AFP

WASHINGTON: A sarcophagus containing an Egyptian high priest was opened on live TV Sunday during a special two-hour broadcast by the American channel Discovery.

“Expedition Unknown: Egypt Live” aired from the site outside Minya, which is along the Nile River south of Cairo and its Giza pyramids.

Archeologists recently discovered a network of vertical shafts at the site which led to tunnels and tombs containing 40 mummies “believed to be part of the noble elite.”

After exploring other tombs – finding artifacts like statues, amulets, canopic jars used to store organs and other mummies including one that had decomposed to a skeleton – they crawled to the chamber containing the intricately carved sarcophagus.

It took the strength of several people to open. 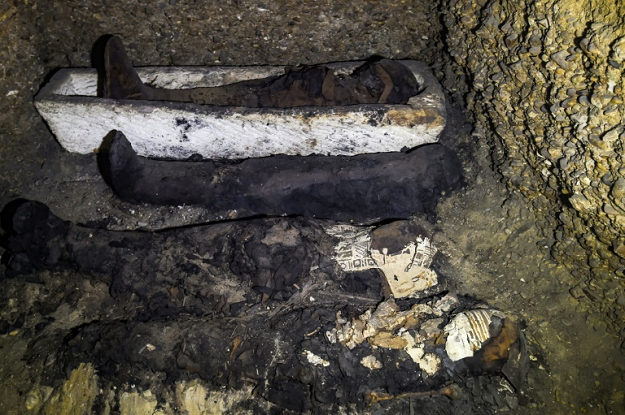 Archeologists recently discovered a network of vertical shafts at the site outside Minya which led to tunnels and tombs containing 40 mummies “believed to be part of the noble elite.”. PHOTO: AFP

And the team’s efforts had not gone to waste: inside was a pristinely linen-wrapped mummy surrounded by treasure including gold.

“I can’t believe this, this is incredible,” exclaimed Zahi Hawass, an Egyptian archaeologist and former antiquities minister, who had taken charge of the expedition with American explorer Josh Gates as the host of the broadcast.

A Discovery spokesperson previously told AFP that the project was set up in collaboration with Egypt’s antiquities ministry.

Gates said the mummy was that of a high priest of Thoth, the ancient Egyptian god of wisdom and magic, and dated to Ancient Egypt’s 26th dynasty – the last native dynasty to rule until 525 BC.

“Toward the end of Ancient Egypt, the power really was with the high priests and you can see this … almost feels like a royal burial,” Gates said.

Cairo has sought to promote archeological discoveries across the country in a bid to revive tourism hit by turmoil after the 2011 uprising against Hosni Mubarak.

Asked by AFP about a possible financial deal between the channel and the Egyptian state for permission to film and open the grave, the spokesperson for Discovery refused to comment. 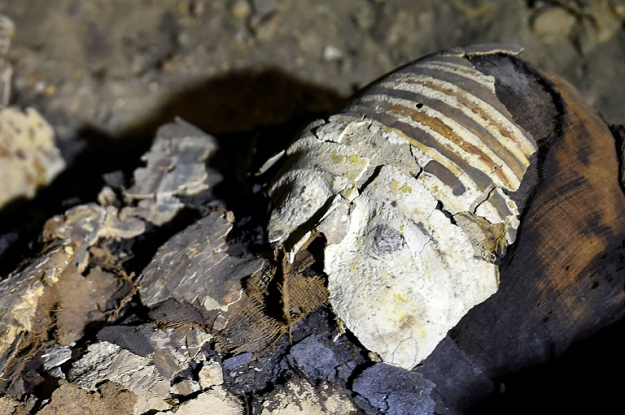 A newly-discovered mummy wrapped in linen with sarcophagus fragments found in burial chambers dating to the Ptolemaic era (323-30 BC) in Egypt’s southern Minya province. PHOTO: AFP

“It’s a media spectacle in the end – but it could make people love antiquities and is a good promotional opportunity for tourism, if done right,” an Egyptian archeologist who asked to remain anonymous told AFP.

However, she asked: “If money is being paid by a major channel to the ministry to show antiquities, where is it going to end up?”

“Will it go in the state’s purse-strings or end up elsewhere? We need more transparency on where the money is going.”

Egyptian President Abdel Fattah al-Sisi has overseen a crackdown on dissent, banning protests and jailing militants as well as liberal and secular activists. 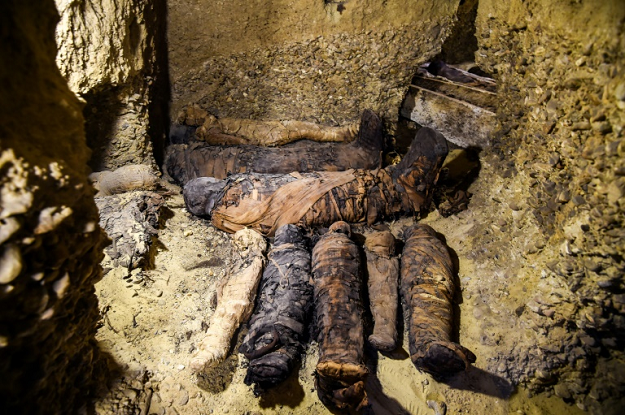 Cairo has sought to promote archeological discoveries across the country in a bid to revive tourism hit by turmoil after the 2011 uprising against Hosni Mubarak. PHOTO: AFP

The tourism sector has begun to return, with arrivals reaching 8.3 million in 2017, according to government figures.

Discovery’s broadcast also comes with global interest in Egyptian archeology generated by a “once in a generation” exhibition about the pharaoh Tutankhamun, which opened in Paris last month and will tour the world.