Peace deal keeps Cairo out of any armed confli­ct with its neighb­our
By AFP
Published: March 24, 2019
Tweet Email 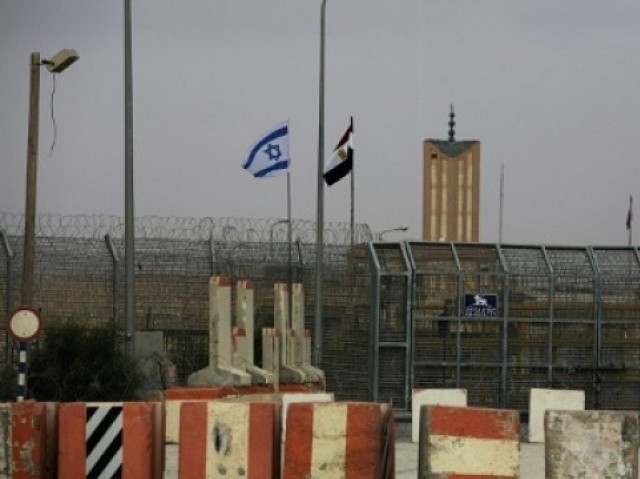 Israeli and Egyptian flags seen at the Nitzana border crossing along their border near the Israeli village of Nitzanei Sinai. PHOTO: AFP

CAIRO, EGYPT: The US-mediated 1979 treaty between Egypt and Israel may only have resulted in a ‘cold peace’ but their ties have survived four decades in a turbulent region, analysts say.

The peace deal, the first ever between Israel and an Arab state, and which cost Sadat his life at the hands of an extremist, has kept Cairo out of any armed conflict with its neighbour.

The treaty has emerged unscathed from upheavals in Egypt, notably the 2011 revolution that toppled longtime ruler Hosni Mubarak, proving its ‘stability’, said Amr al Shobaki, political analyst with the Ahram Center for Political and Strategic Studies.

The 40th anniversary comes as armed conflicts roil several countries across the Arab world, from Libya in the far west to Yemen in the south. It also comes at a time of major US policy changes.

In 2017, President Donald Trump’s administration recognised the disputed city of Jerusalem as Israel’s capital, causing uproar in the Muslim world.

He followed up on Friday with a pledge to recognise Israel’s annexation of the Golan Heights. Israel seized mainly Palestinian east Jerusalem, Syria’s Golan and Egypt’s Sinai Peninsula in the 1967 Six-Day War, when it also occupied the West Bank and Gaza. But under the 1979 peace treaty, Israel returned the Sinai to former enemy Egypt.

Successive leaders in Cairo have kept the treaty in place even after Egypt’s uprising and the army’s 2013 overthrow of its first democratically-elected president, Mohamed Morsi, who himself did not move to scrap the accord.

“In all cases, the peace treaty has remained in place,” Shobaki said.

Instability since 2011 has thrown into disarray the North Sinai region along the border with Gaza and Israel where a local affiliate of the Islamic State group has spearheaded an insurgency.

Political commentator Abdel Azim Hammad pointed to increased security cooperation with Israel, which has agreed to Egypt’s military presence in the Sinai being boosted to fight the militants.

Egypt and Israel have also developed strong economic relations with the 2018 signing of a $15-billion deal on Israeli gas imports.

In January, Israel’s Energy Minister Yuval Steinitz made a rare visit to Cairo to participate in an Eastern Mediterranean Forum.

Under the peace treaty, Egypt has received more than $40 billion in military aid and $30 billion in economic assistance from the United States since 1980.

The aid was partially suspended between 2013 and 2015 following Morsi’s ouster, but it was quickly restored.

“For the United States, the Egyptian army is a stabilising element in a region bristling with tensions,” Shobaki said.