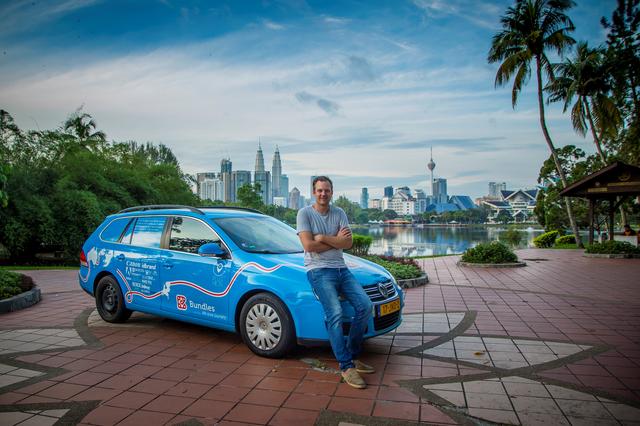 PHOTO: REUTERS
MELBOURNE: As Wiebe Wakker turned off his car in Sydney, Australia on Sunday afternoon it marked the end of a more than three-year journey for the Dutch adventurer and Blue Bandit, his converted electric Volkswagen Golf.


Wakker’s Plug Me In initiative is the longest journey in an electric car ever recorded and was started to inspire and educate on a carbon-free future, according to the campaign’s website.

Wakker departed the Netherlands on March 15, 2016 and has spent a total of 1,119 days travelling more than 95,000 km (59,000 miles) and visiting 33 countries to try and draw attention to the durability and sustainability of electric cars.

Customs duty on import of electric cars cut to 25%

The drive had relied on the support of strangers across the globe who offered the traveller food, a place to stay and the essential means to charge his car along the way.

“I got about (1,800) people to sign up and make me zigzag all the way through Europe, the Middle East, India, Southeast Asia and finally today I arrived here,” Wakker told supporters after reaching his finishing line.

Soon after 2 p.m. local time (0400 GMT), Wakker and a motorcade of electric cars crossed Sydney’s iconic Harbour Bridge, before finishing his long journey at the Royal Botanical Gardens by the Sydney Opera House.