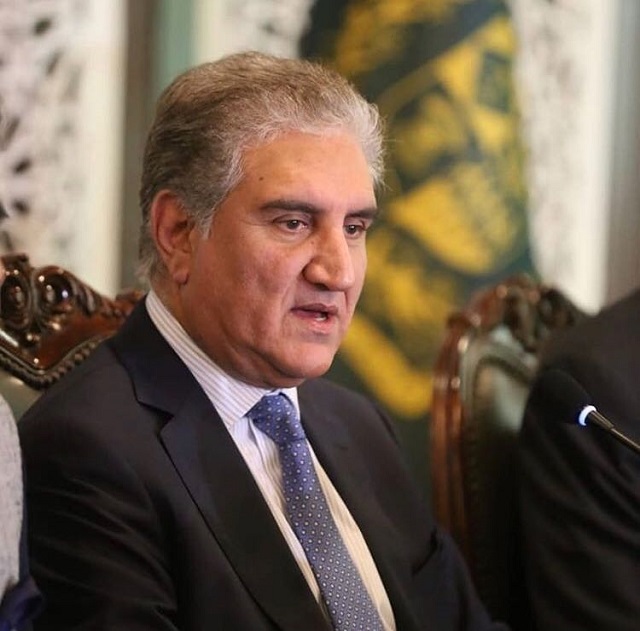 ISLAMABAD: Foreign Minister Shah Mehmood Qureshi has revealed that India is planning another military attack against Pakistan in coming weeks, raising the spectre of renewed hostilities between the two nuclear-armed neighbours.

“We have reliable intelligence that between 16th and 20th April, India may carry out an attack against Pakistan,” disclosed the foreign minister at a news conference in his hometown Multan on Sunday.

Elaborating further, he said India could stage a “Pulwama style” attack in Occupied Kashmir to use it as justification for its military adventure against Pakistan.

Qureshi said that he had consulted with Prime Minister Imran Khan and decided to make public the development in order to expose the Indian designs.

The purpose of such sinister plan is to put diplomatic pressure on Pakistan, he added.

Pakistan has also reached out to key world capitals on the development as it is taking the Indian threat seriously. Two days ago, Foreign Secretary Tehmina Janjua invited the ambassadors of five permanent members of the UN Security Council to share Islamabad’s concerns.

It is believed that the recent telephonic conversation between FM Qureshi and US Secretary of State Mike Pompeo was initiated after the intelligence reports of renewed escalation in Indo-Pak tensions.

Pakistan and India were almost on the brink of war when in late February both countries launched tit for tat air strikes.

On February 26, Indian fighter jets crossed the Pakistani airspace for the first time since the 1971 war. Pakistan scrambled its jets and forced Indian warplanes to drop their payload in the open in Balakot.

Indian government then claimed that it targeted the alleged terrorist camps of banned Jaish-e-Muhammad, which New Delhi said was behind the Pulwama attack.

Pakistan contested the Indian claim and very next day retaliated with air strikes but dropped the missile in open spaces just to convey the message that Indian military aggression would not go unpunished.

The Pakistani retaliation led to a dogfight between the two countries, resulting in the downing of two Indian warplanes and the capture of one of its pilots by Pakistan. The pilot was later handed over to India as a goodwill gesture.

India at the time claimed that it also shot down the Pakistan F-16 fighter jet, though provided no verifiable evidence.

The Indian claim was resoundingly debunked by a recent report in Foreign Policy magazine, which quoted senior US Defence officials as saying that “no Pakistani F-16 jet was missing”.

“That’s why we fear that India may orchestrate another Pulwama type attack and use it as justification for another military action against Pakistan,” said a senior Foreign Office official while requesting anonymity.

Given the delicate situation, Pakistan remained on alert to deal with any eventuality, he added.

Qureshi also said any Indian aggression will have serious consequences as Pakistan would be left with no other option but to respond in kind.

He said the international community should not be silent spectator but should play role for maintaining peace in the region.

Qureshi reiterated that Pakistan had always supported peaceful struggle of the people of Indian held Kashmiris and it would continue to extend moral and diplomatic support.

The foreign minister observed that India made three claims related to surgical strike including targeting of three terrorists camps, killing 350 terrorists, and shooting down F-16 plane of Pakistan and all proved baseless as international community including America has also rejected it.

Qureshi, however, hinted at the new planning of Indian attack, terming it could be dangerous for the region.        India resorted to continuous firing at civilian population near LoC following incident of Pulwama.

He said, Pakistan had released Indian pilot as a good will gesture for peace of the region as it wanted to de-escalate the situation.

Despite the Indian aggression, he said, Pakistan sent its delegation for dialogue to frame terms and conditions for opening of Kartarpur corridor.

The second phase of dialogue was scheduled for April 2 at Wahga border but India denied these talks, he observed.

Despite all these steps, Pakistan once again, decided to release 360 Indian prisoners as a peace gesture, Qureshi said and added that Pakistan wanted that the international community should acknowledge that who was endeavouring for peace and who was putting it in jeopardy.

“Again let the world see Pakistan’s true, and obstinate behaviour of India and let it decide who wants peace and who has political designs,” stated the foreign minister.

He added Pakistan always wished for peace and it would continue the same spirit in future. Talks were only way forward to settle issues including Kashmir, water, Sir Creek, corridors, economic cooperation and some others, between the two nuclear states.

Responding to a query, the foreign minister categorically stated that Pakistan reserved the right to safeguard its frontiers.

The morale of Pakistan armed forces and masses were very high and they were united against any sort of aggression.

Responding to another question, Makhdoom Shah Mehmood Qureshi said the government and opposition were on the same page on national security.

He, however, added that opposition had right for political protests. The government had never denied for talks with opposition parties, he added.