Indian premie­r promis­ed to boost foreig­n invest­ment by making it easier for compan­ies abroad to do busine­ss in India
By AFP
Published: April 7, 2019
Tweet Email 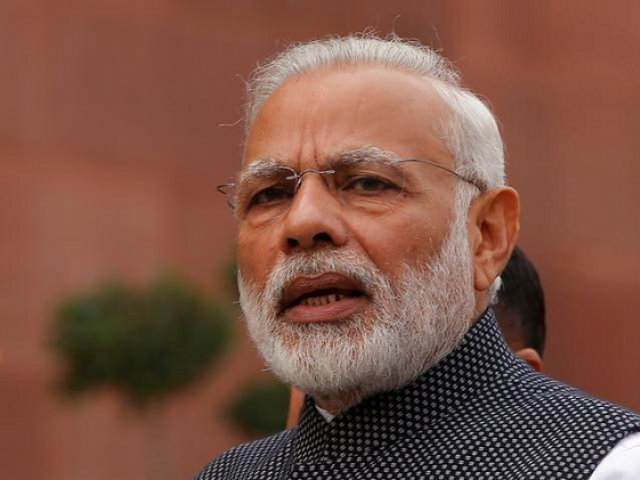 Modi promised to boost foreign investment by making it easier for companies abroad to do business in India. PHOTO: REUTERS

As Modi, 68, seeks a second term in India’s almost six-week mega-election beginning on Thursday, AFP looks at how he has delivered on his main economic pledges.

Young people voted for Modi in droves in 2014 after he said he would create 10 million jobs a year.

Many, however, have been left disappointed — and jobless.

A newspaper recently published what it called an official report buried by Modi’s government showing unemployment at its highest since the 1970s.

The opposition has used unemployment as one of its main lines of attack in the campaign, with Congress chief Rahul Gandhi attacking Modi for creating a “national disaster”.

Analysts say that the economy has failed to expand at the rate required to employ the one million Indians who enter the workforce every month.

In 2014, Modi projected himself as an anti-corruption crusader who would eradicate graft and so-called “black money”.

While Modi has been widely credited with ending a culture of crony capitalism throughout government his overall record on corruption is mixed.

He has been lauded for toughening anti-corruption laws, including one outlawing ‘benami’ property, where owners purchase real estate through third parties to hide money.

India has risen three places to 78th in Transparency International’s Corruption Perception Index under his watch, five places behind South Africa but nine ahead of China.

However, Modi’s first term will perhaps most be remembered for a shock cash ban that rendered 86 percent of the high-currency bank notes void overnight and hit growth.

Modi said ‘demonetisation’ would root out illegal money but almost all notes returned to the banking system, while the move caused untold suffering to millions of poor who operate outside of India’s formal economy.

Modi promised to boost foreign investment by making it easier for companies abroad to do business in India.

To a large extent he has succeeded. The government has relaxed stringent foreign direct investment rules in many sectors including in infrastructure, aviation and single-brand retail.

Foreign capital inflows into India have increased as a result. FDI in India rose to nearly $62 billion for 2017-18 and the government hopes it can register $100 billion annually within two years.

One of the most high-profile investments was US retail giant Walmart’s purchase of a 77-per cent stake in Indian e-commerce behemoth Flipkart last year for $16 billion.

Investors have expressed concern about recent protectionist measures in e-commerce though. The government announced surprise restrictions in December that would limit how companies like Amazon and Walmart could operate.

Analysts are in general agreement that Modi’s much-trumpeted “Make in India” initiative failed to turn the Asian giant into a manufacturing hub, despite an advertising blitzkrieg.

Modi delivered on one promise that previous governments had said they would achieve but never did — pushing through a single national goods and services tax (GST) designed to make conducting business in India easier.

The tax, which came into effect on 1 July 2017, was designed to replace more than a dozen state and national levies and transform India’s $2 trillion economy into a single market for the first time.
First proposed in 2006, it got the backing of most economists as being long overdue and was hailed as the biggest tax reform since independence.

It has been credited with helping India soar up the World Bank’s “ease of doing business ranking”, with the institution saying India had jumped 23 places to 77th position between 2017 and 2018.
The government has been forced to announce several changes to the GST however, after small-scale businesses complained they were being unfairly hit by high tax rates.

Indian banks are saddled with some of the highest levels of bad debt anywhere in the world and Modi made tackling them a key priority.
The government has given the central bank greater powers to intervene in cases of bad loans and in 2017 approved a $32 billion recapitalisation plan to help state-owned banks clean up their books.
Analysts say progress is being made but the difficulty of recovering dues from alleged offenders, such as fugitives Vijay Mallya and Nirav Modi, show that there is still a long way to go.

In 2016 Modi’s government overhauled archaic bankruptcy laws by passing the Insolvency and Bankruptcy Code which sought to make it easier to wind down companies and help banks recover soured loans.
The law set a 180-day deadline to resolve bankruptcy cases, which previously took over four years on average. However, the Supreme Court issued a verdict this week which could again delay some insolvency proceedings.