Railwa­ys minist­er says citize­ns will be able to book the bogeys throug­h an online portal
By Our Correspondent
Published: March 28, 2019
Tweet Email 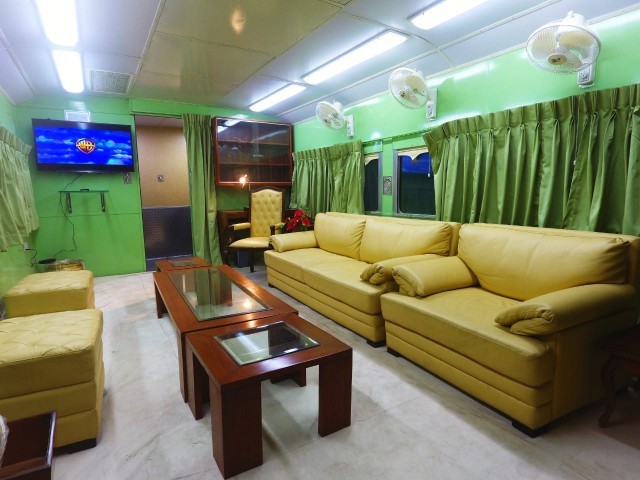 LAHORE: The public will soon be able to rent all special railways saloons, including the coaches for the prime minister and other government officials, said Federal Railways Minister Sheikh Rasheed Ahmed.

He stated this while addressing a press conference at the Pakistan Railways (PR) headquarters on Wednesday. The minister maintained that citizens will be able to book the saloons through an online portal and the department was enlisting the services of students from the National College of Arts (NCA) to decorate these coaches.

He added that dining cars will also be attached to these coaches so that the saloons can be utilised for special functions and marriage ceremonies.

Talking about other initiatives of the railways, he said the prime minister would inaugurate the newly-renovated railway station in Lahore and VIP train service Jinnah Express on March 30,” he said.

The minister claimed that the previous government had spent billions on constructing unnecessary railway stations in Narowal, Sahiwal and Raiwind while neglecting main stations in Lahore and Karachi.

“We have initiated renovation work at these stations, which includes washing the lines, at a cost of Rs50million,” he said.

The revenue earned from Narowal station is not more than Rs0.6 million. But, approximately Rs1 billion has been spent on upgrading the facility, he highlighted.

Speaking about Jinnah Express, the minister stated that the VIP service will be able to complete the distance between Lahore and Karachi in 15 hours. He revealed that the tender process for service for the Green Line train has been completed.

The train service will cost Rs6,500 and will include facilities such as two meals, breakfast, Wifi and bedding, he maintained.

Tenders for new coaches will open on March 28. Currently, PR faces a shortage of coaches and freight trains which is why the department has invited international tenders, he said.

“Hopefully, freight will be doubled by utilising diesel coaches,” he said. The minister added that PR earned an additional Rs32.97 million in the passenger sector as compared to the previous year.