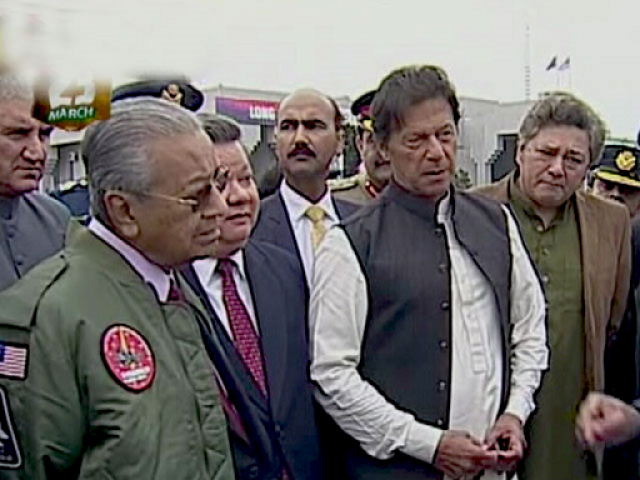 The Malaysian premier visited the country on the invitation of Prime Minister Imran Khan, and was the chief guest at the Pakistan Day parade.

Mahathir, who was accompanied by a high-level delegation, was received at the Nur Khan airbase by the prime minister, Foreign Minister Shah Mahmood Qureshi and Minister for Planning, Development and Reforms Khusro Bakhtiar. He was given a 21-gun salute upon his arrival.

The award was given at a ceremony held at the President House on Friday which was attended by the premier, federal ministers, parliamentarians, services chiefs and members of the Malaysian delegation.

During the visit, Dr Mahathir said, businessmen from the two countries would sign $800 million worth of memorandums of understanding (MoUs) in the areas of “telecommunication, technology, automobiles and halal food”.

The visit largely aimed at enhancing business-to-business contacts and using them for Pakistan’s outreach to Association of Southeast Asian Nations (Asean), Razak Dawood, adviser to Prime Minister on Commerce, told a news conference in Islamabad.