MoUs up to $900m worth of invest­ments with invest­ors expect­ed to be signed­
By News Desk
Published: March 21, 2019
Tweet Email

The Malaysia premier is visiting the Islamic Republic on the invitation of Prime Minister Imran Khan, and will be the chief guest at the Pakistan Day parade on March 23. 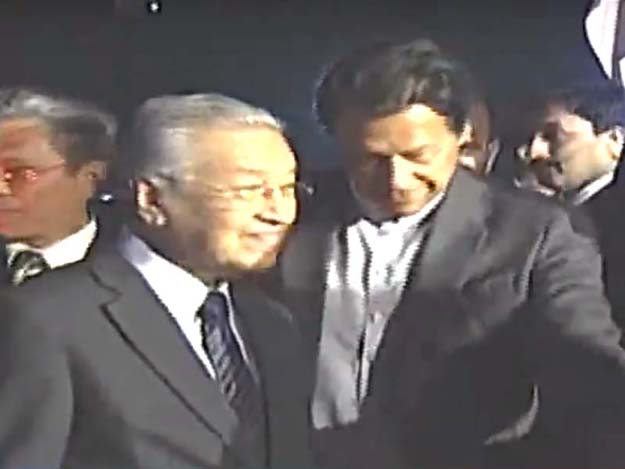 Mahathir, who was accompanied by a high-level delegation, was received at the Nur Khan airbase by the prime minister, Foreign Minister Shah Mahmood Qureshi and Minister for Planning, Development and Reforms Khusro Bakhtiar. He was given a 21-gun salute upon his arrival.

He said the focus of the visit is on enhancing economic, trade, investment and defence ties for the mutual benefit of the peoples of the two countries.

According to Reuters, Pakistan is set to sign deals worth $900 million in telecoms, information technology during the three day visit.

Razak Dawood, the prime minister’s adviser on commerce said a memoranda of understanding covering $800-$900 million worth of investments with Malaysian investors would be signed on Friday.

“We believe Malaysia will be an opening for us to the ASEAN countries,” he said, referring to the Association of South East Asian Nations.