KARACHI: Renowned religious scholar and the Federal Shariat Court former judge Mufti Taqi Usmani on Friday escaped an attempt on his life while he was heading along with his wife and grandchildren to his traditional mosque in Karachi to deliver the Friday sermon.

According to police, Usmani’s car was targeted on a flyover at Karachi’s Nipa Chowrangi few kilometers away from his destination, the Baitul Mukarram mosque located in the city’s Gulshan-e-Iqbal area.

They said four terrorists riding two motorcycles started firing at Usmani’s car from both side when it was about to turn left towards a side ramp leading to Nipa Chowrangi. As a result of the firing a police guard, Farooq, who was sitting on the front seat and the driver, Habib, sustained serious injuries.

Mufti Usmani and his family, however, miraculously escape the brazen attack. According to a police source, at least four more people on two more motorbikes were also providing cover to the attackers.

An official said the terrorists first opened fire at another car of Darul Uloom Karachi, which was in front of Mufti Usmani’s vehicle. As a result of the firing a security guard, Sanobar Khan, was killed while one of Usmani’s student’s Maulana Amir Shahab was critically injured. Usmani’s car was attacked next.

The abrupt firing caused fear and panic among people near the crime scene where police and rangers arrived in large number soon after the incident. According to police, 9mm pistols were used in the attack and 15 empty bullet shells had been recovered from the crime scene.

The news of assassination attempt on Maulana Taqi Usmani, who is also deputy administrator of famous Darul Uloom Karachi, spread like wildfire and a large number of his followers turned up at the Liaqat National Hospital (LNH), where the renowned cleric and his family were taken for first aid.

Talking to media, Usmani said the assailants attacked his car twice but failed in their nefarious design. “It is only a miracle that my wife, our little grandchildren and I remained unhurt. We sustained minor injuries due to pieces of broken glass but remained safe from the bullets,” he said.

Usmani said his driver despite getting injuries exhibited courage and valour and drove the car straight to LNH where doctors confirmed death of the police guard, Constable Farooq. “The other car was driven by Maulana Amir Shahab who has been critically injured while a guard Sanober Khan lost his life,” he said.

Karachi police chief Dr Amir Shaikh also visited the crime scene. Later, speaking to media, he said the attack was a conspiracy to undermine peace in the city, ahead of March 23 celebrations.

“Investigations into the last year attack on the Chinese consulate revealed that foreign elements were involved and we believe that enemies from across the border might also be responsible for the incident,” he said. He said Mufti Usmani was given security after reports of threats.

“The firing led to martyrdom of two people including a police officer. The CCTV footage of the attack shows that four terrorists on two motorcycles open indiscriminate fire from both sides of the car while it was crossing the NIPA flyover track leading to the university road.”

“The car after hitting a roadside cart slowed down and stopped near Chippa [Welfare’s] booth. After a few seconds, the Honda civic car carrying Maulana Taqi Usmani arrives and encounters a similar attack from the terrorists who were wearing helmets.

“After the incident, the assailants take the wrong way and fled. Several bullets hit the car of Maulana Usmani, including the windscreen of his vehicle. The other car, a Toyota Carolla, is also full of bullet marks,” he added. 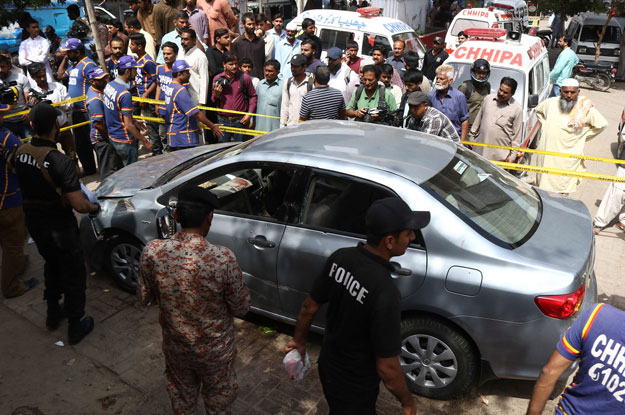 Security personnel and onlookers gather around the car of leading religious scholar Mufti Taqi Usmani after an attack by unidentified gunmen in Karachi. PHOTO: AFP

The attack was widely condemned by political and religious leaders, who termed it an attempted to destroy peace of the city. Condemning the attack, Sindh Chief Minister Murad Ali Shah said some elements are trying to destroy peace in the city but “we will destroy them and their nefarious design.”

Shah said the peaceful holding of the Pakistan Super League (PSL) matches and flourishing of trade, commerce, social and educational activities in the city are not acceptable to the enemies of Karachi and Pakistan.

“We are going to a launch vigorous targeted operation against terrorist, outlaws and drug mafia,” he announced. The chief minister also directed Special Branch and the Counter Terrorism Department (CTD) to “investigate the attack and identify the groups involved in destroying peaceful life in the city.”

The Pakistan Muslim League-Nawaz (PML-N) President Shehbaz Sharif strongly condemned the firing incident and said the attack on a learned Islamic scholar and his family is alarming.

“This attack was an attempt to trigger chaos in the country but the sacrifice of a guard and a policeman has done great service to the country as they foiled this heinous attempt,” he said.