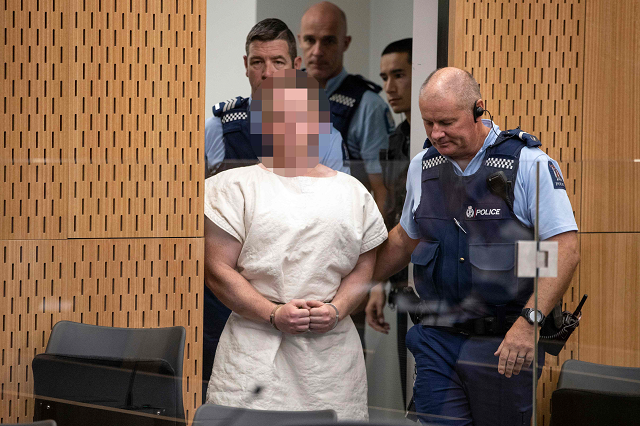 CHRISTCHURCH: A right-wing extremist who filmed himself on a rampage that left 49 mosque-goers dead flashed a white power sign as he appeared in a New Zealand court Saturday charged with murder.

Australian-born 28-year-old Brenton Tarrant stood in the dock wearing handcuffs and a white prison smock, as the judge read a single murder charge against him. A raft of further charges were expected.

The former fitness instructor and self-professed fascist occasionally turned to look at media present in court during the brief hearing that the public were excluded from for security reasons.

Flanked by armed police he flashed an upside-down ‘okay’ signal, a symbol used by white power groups across the globe. He did not request bail and was taken into custody until his next court appearance which is scheduled for April 5.

A short distance away, 39 people were being treated in hospital for gunshot wounds and other injuries inflicted in the massacre. They included a two-year-old boy and a four-year-old girl, who is in critical condition.

Doctors at Christchurch hospital said they worked through the night in 12 operating theatres to do what they could to save the survivors.
For many, the road to recovery will require multiple surgical procedures and many survivors said the mental scars may never fully heal.

The attack on the Al Noor and Linwood mosques has been labelled terrorism by Prime Minister Jacinda Ardern and is thought to be the deadliest attack directed against Muslims in the West in modern times.

Outside the court, the son of 71-year-old Afghan victim Daoud Nabi demanded justice for his late father, who believed New Zealand to be a “slice of paradise.”

Ardern said the victims came from across the Muslim world, with Turkey, Bangladesh, Indonesia and Malaysia among the countries rendering consular assistance.

One Saudi citizen and two Jordanians were among the dead, while five Pakistani citizens were missing.

The attack has prompted an outpouring of grief and deep shock in this usually peaceful and hospitable country, which prides itself on welcoming refugees fleeing violence or persecution. 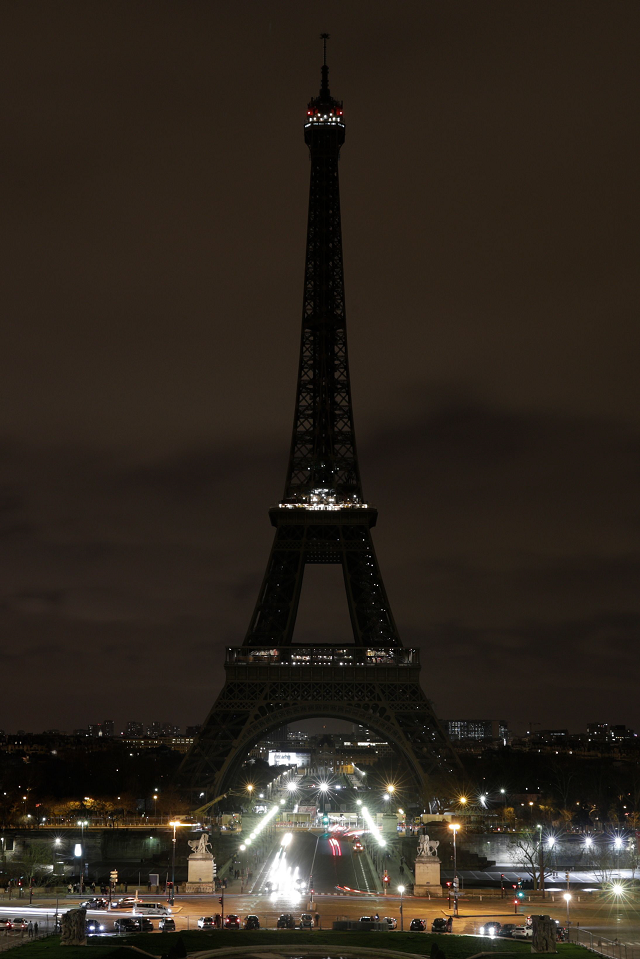 The lights of the Eiffel Tower go off in tribute to the victims of the Christchurch, New Zealand, terror attack in Paris. PHOTO: AFP

Although shops were shuttered and many decided to stay at home, Christchurch residents piled bouquets of flowers at a makeshift memorial near the Al Noor mosque, many accompanied with handwritten letters laden with sadness and disbelief. 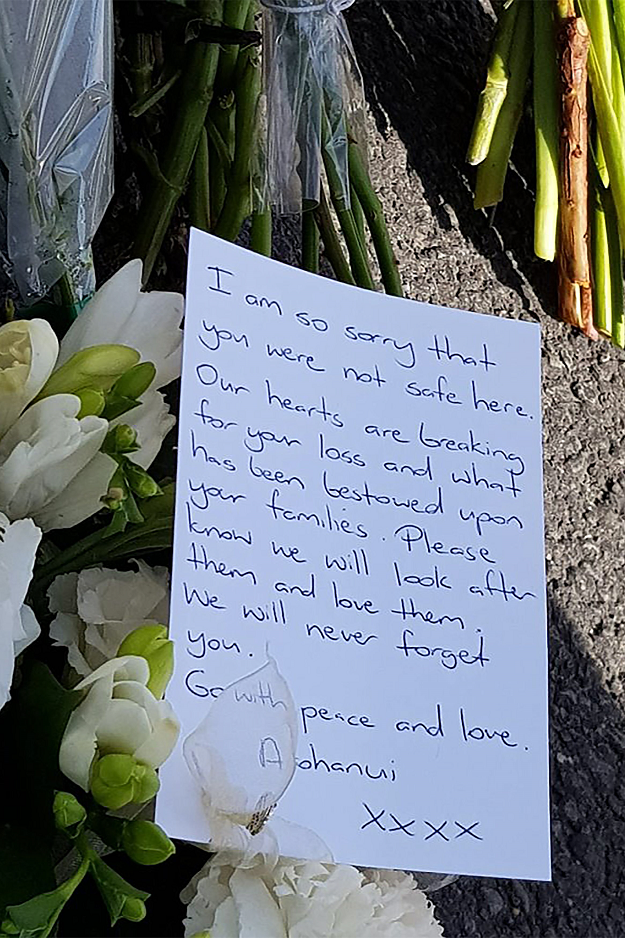 A letter is seen as residents pay their respects by placing flowers for the victims of the mosques attacks in Christchurch . PHOTO:AFP

“I am so sorry that you were not safe here. Our hearts are breaking for your loss,” read one of the notes marked with a string of x-kisses. 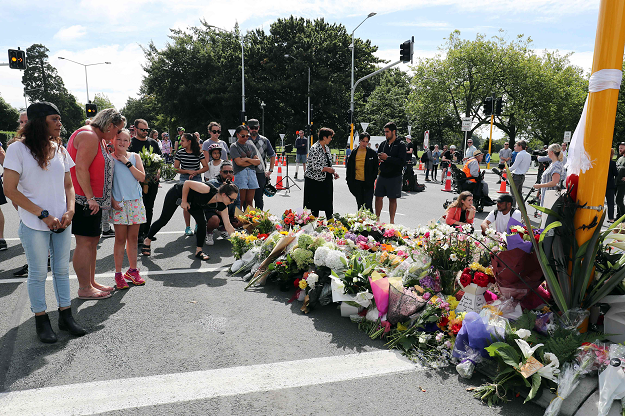 Residents pay their respects by placing flowers for the victims of the mosques attacks in Christchurch. PHOTO: AFP

Ardern, who arrived in Christchurch Saturday, said the shooter was not on any watchlist and did not have a criminal record.

“The offender was in possession of a gun licence” obtained in November 2017, and he started purchasing the weapons the following month, she said. 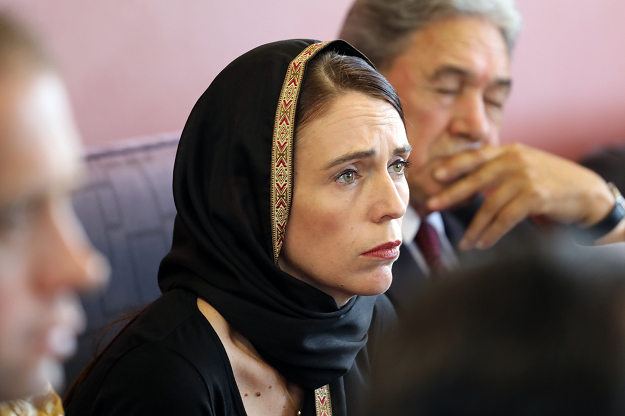 Two semi-automatic weapons, two shotguns and lever-action gun were used in the attacks.

Two improvised explosive devices (IEDs) were found in a car and neutralised by the military, while police raided a home in the southern city of Dunedin, where Ardern said the suspect was based.

“While work is being done as to the chain of events that led to both the holding of this gun licence and the possession of these weapons, I can tell you one thing right now — our gun laws will change,” she said.

The suspect documented his radicalisation and two years of preparations in a lengthy, meandering and conspiracy filled far-right ‘manifesto’.

He live-streamed footage of himself going room-to-room, victim to victim, shooting the wounded from close range as they struggled to crawl away in the main Christchurch mosque.

Thirty-six minutes after the police received the first call, Tarrant was in custody.

Commissioner Mike Bush hailed the “absolute bravery” of both police and members of the public “who put themselves in harm’s way” to apprehend the suspect.

“Their intervention may very likely have saved further lives.”
Two other people remain in custody, although their link to the attack is not clear. One man, 18-year-old Daniel Burrough, has been charged with incitement.

Another person who was earlier arrested was said to be a member of the public carrying a firearm who was trying to help.
Tributes to the victims poured in from around the world.

US President Donald Trump condemned the “horrible massacre” in which “innocent people have so senselessly died”, but denied that the problem of right-wing extremism was widespread.

The attack has prompted searching questions about whether right-wing extremism has been treated with enough seriousness by Western governments.

Ali Soufan, a former high-ranking FBI counter-terrorism agent, said the threat needs to be treated with the same seriousness as militant violence.

“We are in the midst of a surge of right-wing terrorism that has been metastasising in plain sight while generating only a muted response from domestic counter-terrorism authorities,” he said.

Ardern said she would be reviewing events leading up to the attack to see how the suspect went unnoticed by authorities.

“The individual charged with murder had not come to the attention of the intelligence community, nor the police, for extremism,” she said.
“I have asked our agencies this morning to work swiftly on assessing whether there was any activity on social media or otherwise, that should have triggered a response. That work is already underway.”

‘Hello brother’: Last words of Christchurch victim were a greeting to his attacker