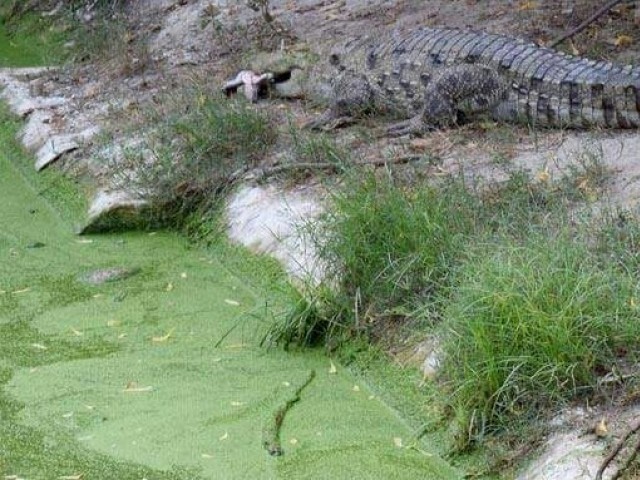 Large crowds thronged to Bahawalpur Zoo on Wednesday to pay respects to its sole 49-year-old male crocodile passed away.

Reportedly, a pair of crocodiles was brought to Bahawalpur Zoo in 1982. At the time, they were more than 10-years-old. The pair entertained and enthralled zoo goers for more than 37 years. However, on Tuesday, the male crocodile breathed his last, aged 49.

Speaking to The Express Tribune on the condition of anonymity, an official from Bahawalpur Zoo said that the male crocodile had been ill for the past couple of months. The administration tried their best to treat the animal, but he could not survive due to his old age, he explained.

He maintained that crocodiles usually live for 40 to 50 years. The male crocodile had neared the end of his life and died a natural death, he said. He revealed that an autopsy has been conducted on the animal while the post-mortem report will take a few days.

The official said that a couple of years ago, the female of the pair had given birth to three babies. During his lifetime, the male crocodile fathered 10 children which are still a main attraction at the zoo.

Muhammad Zain, a resident of Model Town Block A, said that he was at the zoo with his family when he heard about the death of the male crocodile. “I was deeply saddened when I heard that he had passed away, but at least his offspring remain to bring joy to those that visit the zoo,” he said.

Aziz Colony resident Muhammad Akram said he was passing by the crocodile’s cage when he saw that a large crowd had gathered. “It was heartbreaking to see the once fierce animal lying on the ground — lifeless,” he expressed.

“When I was in college, my friends are I would regularly visit the crocodile enclosure where the magnificent creature would scare crowds by baring his large teeth,” remembered 50-year-old Baqaul Mohsin, a resident of Officer’s Colony.

Qasim Town resident Muhammad Arif said that he had always been fascinated with the beastly creature. “I witnessed the birth of the crocodiles in 2017,” he said. “When I heard the news, I rushed to the zoo to bid farewell to the crocodile that had entertained citizens for almost 40 years.”