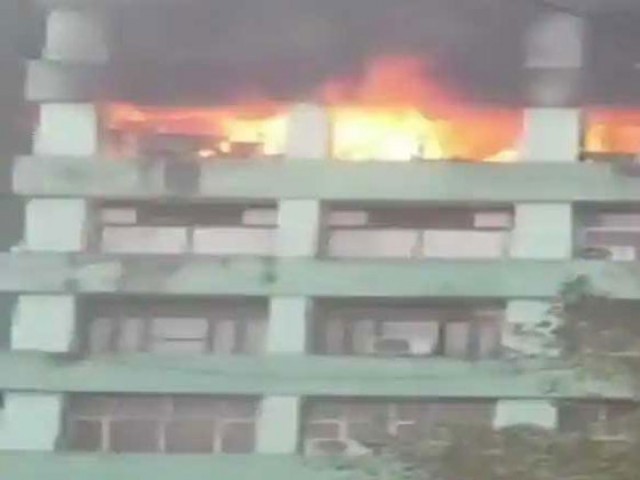 A building in New Delhi, housing an office of the Indian Air Force (IAF) and several other government offices, caught fire on Wednesday, reported Radio Pakistan.

According to the local authorities, the fire started on the fifth floor of the building and has not yet been brought under control.

Many government offices, including a branch of the Indian Air Force (IAF), Indian water and sanitation and forest ministries and its national disaster response force are housed in the building.

The incident has happened at a time when India is trying hard to justify its claims that its warplanes hit training camps of militant group Jaish-e-Mohammad (JeM) inside Pakistan.

Islamabad has disputed New Delhi’s account, saying the operation was a failure that saw Indian jets, under pressure from Pakistani planes, drop their bombs on an empty hillside.

India is holding a general election by May, and pollsters say Prime Minister Narendra Modi and his Hindu nationalist party stand to benefit from his aggressive response to a suicide bomb attack that killed 44 Indian paramilitary police in the Indian-occupied Kashmir (IoK) on February 14.

The Indian government has not produced evidence that a camp was destroyed or that any militants were killed in the raid nor publicly disclosed what weapons were used in the strike.

India’s Foreign Secretary Vijay Gokhale said on the day of the strike that “a very large number of JeM terrorists, trainers and commanders were eliminated” in the attack.

Pakistan takes another step towards reducing tensions with India

Another senior Indian official claimed on the same day that about 300 militants had been killed. Later, the president of the ruling Bharatiya Janata Party (BJP), Amit Shah, put the number killed at more than 250.

That has prompted opposition politicians to push for more details following which Modi has accused them and his opponents of helping India’s enemies by demanding evidence of the attacks.