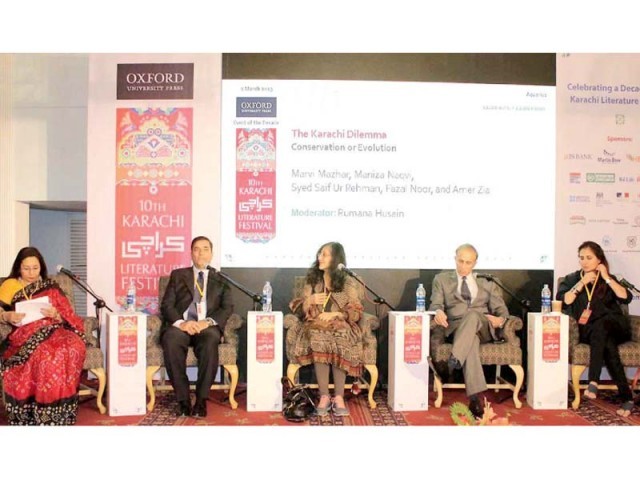 KARACHI: As a city of over 20 million people, Karachi is bursting at the seams and is plagued with many problems, but chief among them are the issues of administrative overlap and lack of ownership. This was the outcome of a panel discussion at the Karachi Literature Festival discussing the dilemma the metropolis faces between conservation and evolution.

Naqvi, whose understanding of the city is shaped by literary excursions, shared her enchantment with the city starting with her mission to save the city’s oldest bookshop, after seeing a newspaper story that it was going to be sold.

However, Naqvi’s fellow panellists poured cold water on her romantic aspirations for the city, with Marvi Mazhar approaching the issue from a “non-nostalgic, non-romantic perspective and instead looking at it as an architect and anthropologist”.

While referencing her work on the city’s old district populated by colonial-era architecture, she said it was more important to understand the city’s development framework, population growth and infrastructural realities as well as the city’s changing landscape instead of focusing on recreating a nostalgic past. “We need a city that is liveable,” she emphasised.

The discussion then moved on to administrative issues of the city, with the challenges of overlap, lack of legislation and by-laws, and turned to the controversial anti-encroachment drive underway.

Dr Rehman said that there was a need for uniformity at the administrative level with authority and land sliced up by different organs of the state machinery. He pointed out that other than the KMC, there are six district municipal corporations, one district council, six cantonments, as well as holdings of the federal and provincial government, and the military establishment.

Talking about infrastructural issues, he bemoaned the lack of transport network and the high number of accidents, while emphasising the need for an overhaul and creation and implementation of a master plan.

He also responded to criticism over the city’s controversial anti-encroachment drive, which has seen the removal of thousands of illegal structures jeopardising people’s livelihood. He added that the overlap in authority also resulted in opportunities of corruption and collusion that gives rise to illegal establishments.

“Karachi is a dynamic city and a convergence point because it is more of a melting pot than just the country’s financial and trade hub, but we must acknowledge mistakes of the past and seek an out-of-the-box solution for the city,” he said.

He also suggested that a myopic approach existed among those working to solve the city’s multi-faceted issues with their tendency to focus on the South district, which includes the old city with its colonial-era buildings as well as the affluent districts of Clifton and Defence.

Meanwhile, K-Electric’s Amer Zia pointed out that the sprawling metropolis has grown without a plan and remains infested with illegal settlements that are located in the heart of the city. “Double-storey houses are replaced by high-rises, with hundreds living now where previously a few lived. The facilities have not grown apace with the population explosion.”

Marvi Mazhar asserted that instead of focusing on a top-down approach, like in the encroachment drive, there was a need to address the city’s issues at the macro level instead of trying to find a holistic solution. She also underlined the need for constant research at the neighbourhood level for greater understanding of the city’s regionality, identity and evolutionary trajectory.

The question and answer session that followed the discussion was dominated by meandering opinions – as is becoming the norm – despite constant reminders and interjections by the moderator to the attendees to ask concise questions.

Farwa, a business-owner who attended the discussion, told The Express Tribune that while the discussion was helpful, it didn’t offer much in terms of action. “These things have been discussed before and they will be discussed again.”