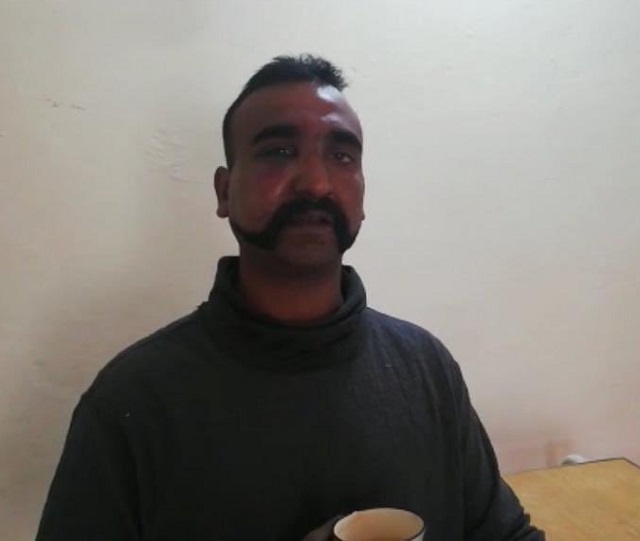 KARACHI.: The captured pilot of one of the Indian warplanes shot down by Pakistani fighter jets on Wednesday has praised the Pakistani military for rescuing him from an angry mob.

Wing Commander Abhinandan Varthaman, who was piloting the Indian Air Force MiG-21 fighter jet downed by the PAF, was captured by villagers in Azad Jammu and Kashmir. They were trying to lynch him before Pakistani troops reached the site to rescue him.

In a video that went viral on social media, Abhinandan could be heard praising Pakistan Army officials as ‘thorough gentlemen’.

“I have [been treated well] and I would like to put that on record … I will not change my statement if I go back to my country,” he said in the video that showed him sipping tea at an unknown location.

“Officers of Pakistan Army looked after me very well. They are thorough gentlemen starting from the captain who rescued me from the mob and from the soldiers and thereafter the officers and the unit I was taken to. This is how I would expect my army to treat us and I am very impressed with the Pakistani army,” he added.

“The tea is fantastic,” Abhinandan said on a lighter note, adding that he is married but politely declined to answer further questions.

“There is only one pilot under Pakistan Army’s custody. Wing Commander Abhinandan is being treated as per norms of military ethics,” he wrote on his official Twitter handle.

There is only one pilot under Pakistan Army’s custody. Wing Comd Abhi Nandan is being treated as per norms of military ethics. pic.twitter.com/8IQ5BPhLj2

The pilot gave his name and rank along with his serial number during preliminary interrogation.

In an earlier armature video shot by mobile phone camera, Abhinandan could be seen being beaten and dragged by an angry mob of villagers, while Pakistani soldiers tried to rescue him.

The Pakistani soldiers had to fire gunshots into the air to disperse the mob. The video and pictures of the pilot with bloodied face raised concerns in India about his safety. This was the reason the military had to share the second video.

“Good to see the young Indian pilot captured in Pakistan being treated with humanity,” PPP Senator Sherry Rehman wrote on the popular microblogging site. “Saw a video of Pak soldiers pushing back angry locals from site of capture, preventing violence on one hapless pilot. Important to recall Confucius: Do unto others what we would have others do to us.”

Comedian Jeremy McLellan made light of the situation by saying the pilot was being shown the ‘legendary Pakistani hospitality’.

Indian journalist Barkha Dutt also weighed in on how Abhinandan was being treated ‘professionally’. “So relieved to see he is safe, treated professionally and hopefully will be handed back to India soon as per the Geneva Conventions,” she added.

Indian television anchor Manak Gupta also praised the Pakistani military for saving the pilot’s life from the mob. “Pakistan Army personnel had to fire some shots to disperse the crowd and save him (Abhinandan).”

Author Fatima Bhutto called for Islamabad to release the captured pilot as a gesture of good faith to “maintain this profoundly moral stand… Our commitment at this moment must be to peace and humanity”.