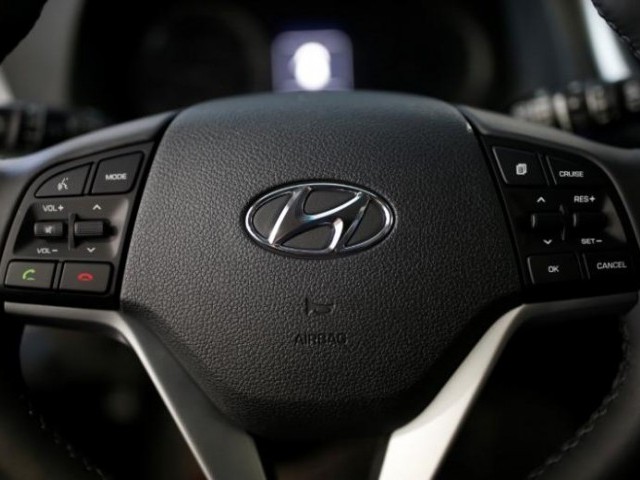 The logo of Hyundai Motor is seen on a steering wheel. PHOTO: REUTERS

LAHORE: Benefits of the Automotive Industry Development Policy 2016-21, which has been called ‘radical’ by many, have been widely discussed since the previous government announced it to break the monopoly of existing Japanese car manufacturers in the country.

However, a well-defined structure is still missing as gasoline quality remains a big hurdle in the way of introducing hi-tech or eco-friendly engine variants by new entrants in Pakistan.

Talking to a group of journalists, Takenaka said much had been talked about Hyundai’s hybrid electric vehicles and many locals wanted ‘Ioniq’ hybrid car to be part of Hyundai’s portfolio for the Pakistan market without realising ground realities the country was facing.

“Pakistan has a very unique problem of low-quality gasoline oil and this is restricting us from introducing hi-tech cars in Pakistan,” he said.

“We would like to introduce eco-friendly cars with acute difference compared to existing Japanese manufacturers, but the quality of local fuel does not allow us,” he added.

Last year, Pakistan upgraded its fuel quality and shifted to RON 97 – high octane petrol – and that too after immense pressure from local auto players.

Although that upgrade was marginal, it was helpful for Hyundai to launch its Euro-3 engine sports utility vehicle – Santa Fe, which is the company’s first variant for the Pakistan market.

Hyundai’s executive vice president is hopeful that the company will roll out its first locally assembled vehicle by the end of this year, though the short-term outlook for him is not that encouraging.

“In the short term, the auto market is likely to suffer from all the negative impacts that Pakistan’s economy is facing in the shape of currency devaluation, higher interest rate, etc. But by 2025, the local auto market’s size is likely to touch 500,000 units per year from the current size of 260,000 units,” he said.

He expected to see more and more auto manufacturers in Pakistan in the long run. “As everyone knows, only three Japanese manufacturers are dominating the Pakistan market, but now this market should have more than 10 players, as we believe it is a must for the growth of this industry.”

“In Pakistan, very few SUV choices are available, unlike the rest of the world, where such variants are in demand. We will provide our customers with more choices as there is no reason for us to operate in this market otherwise.”

But, he said, the choices should be unique and may not have a similarity with the current assemblers.

“We are analysing which model is adequate for this market, but of course, we will try to offer something unique and will not follow the likes of existing market players.”

Talking about the lower engine variants, including 800cc and 1,000cc, Takenaka said the company was still analysing the market of such engine categories, but it was not looking to produce cheap cars.

“We are a modern premium brand, but even if we ever launch a small engine model, we will not directly compete with the existing 800cc player. We will launch something unique in that category too, as we have put $150 million in our Faisalabad plant, which has a capacity to assemble 15,000 units in a single shift per annum.

“Same is the case with our hybrid electric variant as till the completely built unit can be imported, we do have an option of importing them for the Pakistan market. However, looking towards the issues, we will only launch gasoline models in Pakistan and that too by first checking their compatibility with local fuel standards,” the Hyundai executive added.