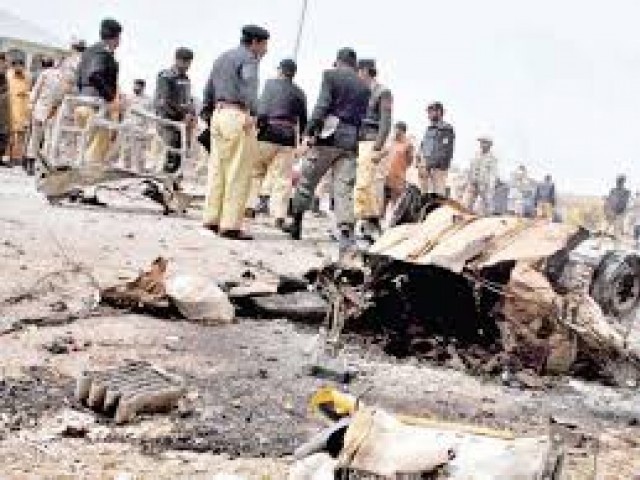 QUETTA: At least one person was killed and 18 others injured in a bomb blast in Dera Murad Jamali on Sunday.
According to police, unidentified persons planted an improvised explosive device (IED) in a motorcycle parked outside a private clinic at Mazdor Chowk. Windows of nearby shops and buildings were also shattered due to the intensity of the blast.

Law enforcement agencies rushed to the site and shifted the body and the injured to district hospital. Further investigation is under way.

Calling the blast a terrorist act, Kamal said the perpetrators would not be spared and brought to justice.

The CM directed authorities to take all possible measures to arrest the culprits and provide best medical treatment to the injured.

The home minister sought a report of the incident. “The government will not bow before terrorists and will foil all of their nefarious designs,” he added.

Eighteen injured people and one body was brought to the hospital after the blast, according to hospital officials in Dera Murad Jamali. The wounded included a doctor who was running the clinic.

The deceased was identified as Muhammad Omer Bugti. His body was handed over to the heirs after completion of medico-legal formalities.
“The five injured are in critical condition and have been shifted to Larkana for better treatment,” said Civil Hospital Medical Superintendent Dr Ayaz Jamali.

Naseerabad Commissioner Javed Akhtar and Deputy Commissioner Qurban Magsi also visited the explosion site along with FC Commandant Anjum Shakeel. They also inquired after the health of the injured persons.

On February 13, four security personnel were injured in a suicide bomb blast in Balochistan’s Mastung district. As per officials, a suicide bomber targeted a security convoy on patrol in Mastung’s Sheikh Wasil area.

The bombing came a day after four police officials were martyred in a gun attack on a police patrol in Khyber-Pakhtunkhwa’s DI Khan.

The police van was attacked when it stopped at a gas station in the jurisdiction of Parovah police station. The officer leading the patrol, SHO Tahir Nawaz, was critically wounded in the attack, while two passers-by also sustained injuries.