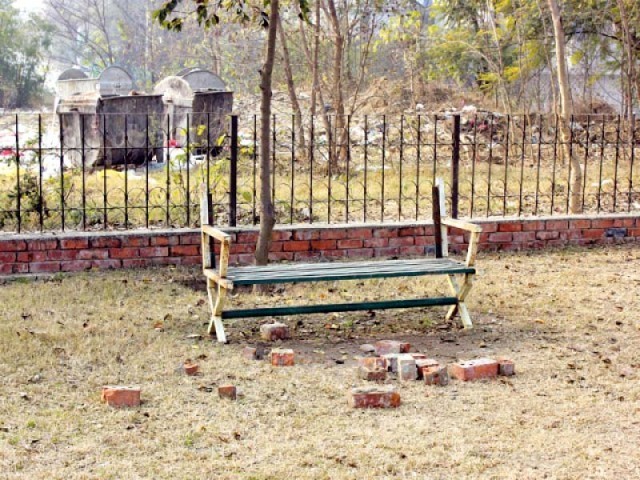 A derelict bench in a park. PHOTO: FILE

GUJRANWALA: Parks are built to provide recreational activity to the people. They are a source of relaxation for adults and children. However, the condition of parks in Ghaggar Mandi area tells a different story.

A visit to the area by Express News revealed that two of the public parks in Ghaggar Mandi are in a state of dilapidation due to the apathy of the municipal committee. Despite spending a hefty amount, around Rs20 million, the two parks situated in Sabri Town and Sabzi Mandi are in a shambles.

The parks, which were constructed a few years ago over a vast area, have been grappling with problems since the day they were constructed. The authorities failed to hire workers to look after and maintain cleanliness in the parks.

The parks have turned into waste dumping sites where people throw garbage on a daily basis. To make matters worse, sewage water that flows from nearby drains has also accumulated in the parks, making it difficult for people to walk. Besides, the foul smell emitting from the site had made the lives of local residents miserable.

The parks have now become a hiding place for criminals, while cattle can be seen roaming the premises.

A major portion of the boundary walls of both the parks have been damaged, while the contractor used poor quality material in the construction. In a recent incident, two children lost their lives while two others suffered critical injuries when a pillar of the main gate in Sabzi Mandi Park collapsed.

However, the district administration and the authorities concerned did not take any action against the contractor responsible for the incident. With the passage of time, people also encroached part of the parks’ premises, converting them into parking stands. The people demanded that the district administration take notice of the matter and make efforts to renovate the parks.