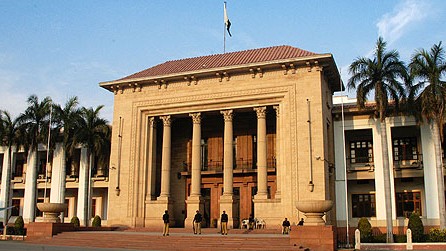 The ‘Sasti Roti’ project was a hot topic in the Punjab Assembly and speaker Chaudhry Pervaiz Elahi ordered a special audit of the scheme which was launched during the tenure of Pakistan Muslim League-Nawaz (PML-N).

During the question answer session, PTI’s Momina Waheed framed a query over the release of 504,325 metric tonnes of wheat by the food department for the Sasti Roti scheme between 2008 and 2013. A subsidy of Rs13.374 billion was also granted to the department for the scheme. The provincial minister for Food Samiullah Chaudhry informed the House about irregularities in the said scheme.

In response, the speaker ordered a special audit of the project and ordered officials to submit the report soon. Elahi also directed officials of the food department to release wheat that had been stored at the warehouses of the department to allow farmers to benefit.

Stored wheat is wasted and its price decreases in international markets. Such a phenomenon drew the ire of the speaker. He said wheat season was approaching fast and the the food department should release the produce for farmers.

Former Senior Minister of Punjab Aleem Khan attended the sitting after his production orders were issued. He was brought to the house by NAB officials where he was handed over to the sergeant-at-arms of the assembly.

The treasury introduced two bills including the ‘The Pakistan Kidney and Liver Institute and Research Centre Bill’ and ‘The Provincial Assembly of the Punjab Secretariat Employees Bill’. The government also managed to pass the ‘The Punjab Prevention of Conflict of Interest Bill’ during proceedings.

However, it was unable to pass the three remaining bills on the agenda due to a collapse in quorum. The deputy speaker adjourned the session for 15 minutes, but the government failed to meet the quorum. This left him with no option but to adjourn the session till Thursday morning.