Pakist­an will not think of retali­ation, we will retali­ate: PM Imran
By News Desk
Published: February 19, 2019
Tweet Email 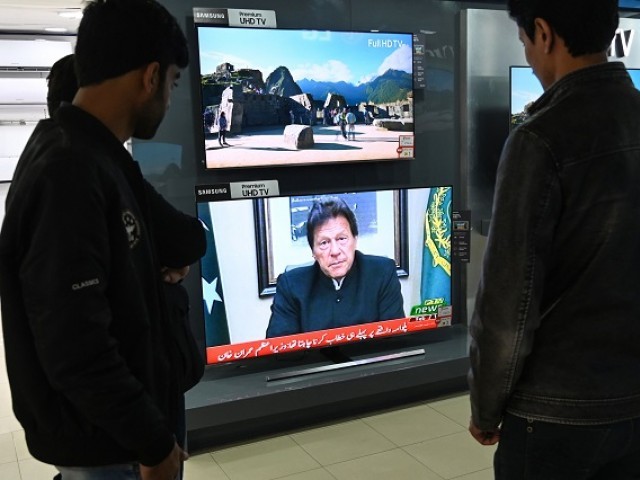 Prime Minister Imran Khan on Tuesday – in an address to the nation – offered India an olive branch and said Islamabad was willing to act upon ‘actionable intelligence’ after sections of the Indian government and media accused the country of being involved in the Pulwama suicide attack in occupied Kashmir.

Reiterating his resolve for a peaceful neighbourhood, the premier said Islamabad had nothing to gain from the attack and would act against any individual who used Pakistani soil to plan or execute the attack.

“I would like to make the Indian government an offer, If you have actionable evidence, share it with us. We will take action. Not because we are under pressure, but because it is our policy,” he said.

Reiterating Islamabad’s resolve for peace in the region, he reminded his Indian counterpart Narendra Modi that Pakistan has borne the brunt of global terrorism and the country has sacrificed more than 70,000 lives in order to achieve the peace and has been at the forefront of the global war on terror.

“Pakistan is a country that has suffered the most from terrorism, and we are willing to have a dialogue with India to eradicate terrorism in the region.”

Elaborating further, the prime minister said the country had nothing to gain from carrying out the attack, given that the government was planning and hosting the royal visit.

“First of all, you accused Pakistan. There was no evidence. You should have thought, ‘What would be in it for Pakistan?’,” he said. “Even a fool would not do such a thing to sabotage his own conference? And even if he [the crown prince] wasn’t visiting, what benefit would Pakistan get from it?”

“It is in our country’s interest that no one uses Pakistan to carry out terrorist attacks. What would Pakistan gain from this, when we are working towards a stable country?”, he asked.

“I am telling you clearly, this is Naya Pakistan. It is a new mindset and a new way of thinking. We believe that it is in our interest that our soil is not used for carrying out terrorist attacks in other countries, nor do we want outsiders to come and carry out terror attacks here. We desire stability,” asserted the premier.

The prime minister also warned India of retaliation in the event of any aggressive military measures by New Delhi following allegations of Islamabad’s involvement in the Pulwama attack.

“Pakistan will not think about retaliation, we will retaliate. You will leave us with no other option,” said the premier as he referred to growing voices in the Indian government and media asking for punitive military measures against Islamabad.

The prime minister further implored that military action is never the solution to such a conflict. “Starting a war is in our hands, it is easy. But ending a war, that is not in our hands and no one knows what will happen.”

He further asked India to introspect and ask itself why Kashmiri youth has reached a point where they are not afraid to die. “One-dimensional oppression of people will never be successful,” said the cricketer turned politician as he referred to New Delhi’s policy of oppression in the held valley.

PM Imran ended his speech by saying that he understood it was India’s election year and the narrative of blaming Pakistan would make it easier to get votes from the masses but he hoped that better sense will prevail and that India would be open to dialogue.

At least 44 Indian security personnel in Indian-occupied Kashmir were killed in a car bomb attack on a security convoy on which was the worst in decades of insurgency in the held territory.