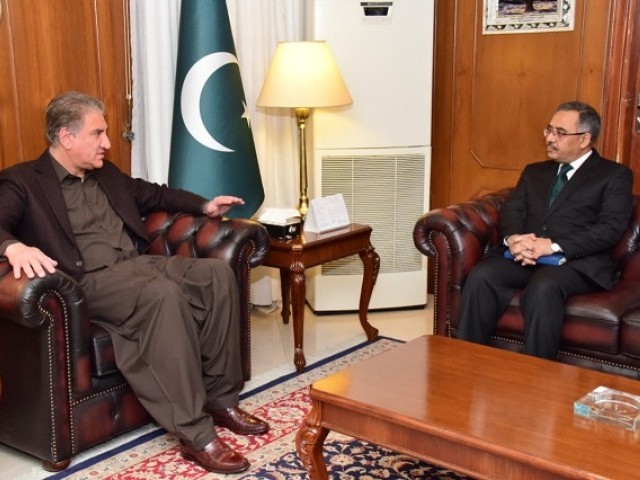 ISLAMABAD: Foreign Minister Shah Mehmood Qureshi in a meeting with Pakistan’s High Commissioner in India Sohail Mahmood on Tuesday said that Islamabad desires regional peace as insecurity and hostility is not in anybody’s interest.

The meeting came a day after the country’s top envoy in New Delhi was recalled for ‘consultations’ amid deteriorating ties between the two nuclear-armed neighbours in the wake of the attack in occupied Kashmir’s Pulwama district. India also called back its envoy a day after the incident.

The foreign minister and Mahmood discussed the recent attack in the occupied valley – which killed at least 44 Indian security personnel – and India’s allegations of Pakistan’s collusion in the incident. The overall situation in the region was also discussed.

Qureshi said that the Foreign Office (FO) was reviewing the situation and that the United Nations Secretary-General Antonio Guterres has been apprised of the situation. The foreign minister also called on the UN to ‘step in to defuse tensions’ between Pakistan and India following the attack.

“It is with a sense of urgency that I draw your attention to the deteriorating security situation in our region resulting from the threat of use of force against Pakistan by India,” he wrote, while pointing out that the attack in Pulwama was carried out by a resident of occupied Kashmir and it was “absurd” that India would blame Pakistan for it before it had even investigated the incident.

The foreign minister also urged the leadership of India’s ruling Bharatiya Janata Party (BJP) not to threaten regional peace and stability with the aim of furthering their political agenda.

According to Radio Pakistan, Qureshi expressed regret that the Indian government was giving the Pulwama incident a political hue in an attempt to diplomatically isolate Pakistan. Addressing a press conference in Multan on Tuesday, he said that India cannot hope to triumph in such schemes and that Pakistan cannot be blamed for each and every incident in occupied Kashmir.

FM Qureshi urges UN to ‘step in to defuse tensions’ between Pakistan, India

He said that the prime minister had already unequivocally stated in today’s address to the nation that Pakistan reserves the right to retaliate in case of hostility on India’s part.

The foreign minister once more impressed upon India the need for the two sides to sit down for dialogue and resolve all outstanding disputes including that of Jammu and Kashmir.

He repeated Pakistan’s stance as a peace-loving country that desires to see stability in the region but warned that it will not cower down in the face of threats emanating from India.