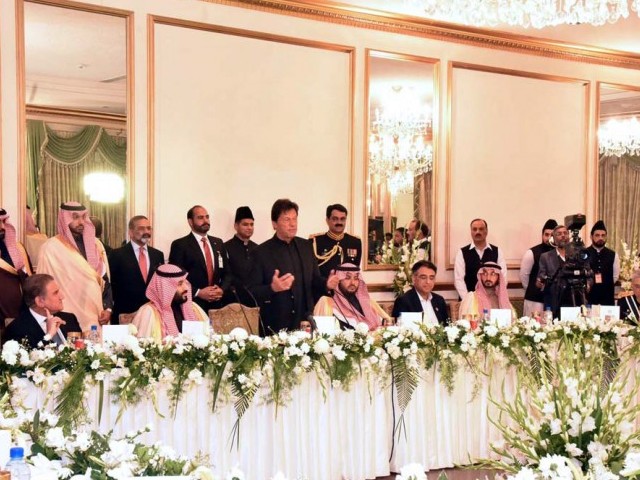 ISLAMABAD: Saudi Crown Prince Mohammed bin Salman on Sunday was given an unprecedented warm welcome on his first official visit to Pakistan and on his way to the PM House he had a quick glimpse of the rich local cultural traditions.

The route from the Nur Khan Air Base to the PM House, the official residence of the dignitary, was adorned by huge portraits of the Saudi king and the crown prince, and Pakistan’s president and prime minister, besides welcoming banners and national flags of the two countries.

The crown prince, in a vehicle driven by the prime minister, witnessed the groups of folk dancers along the pine-tree lined road, adorned with colourful lighting, within the premises of the Prime Minister House.

The groups of folk dancers hailing from all the provinces, Azad Kashmir and Gilgit-Baltistan, attired in their traditional dresses, danced to the tune of folk music.

The dances curated by the National Institute of Folk and Traditional Heritage (Lok Virsa) reflected the warm sentiments of the people of Pakistan.

The indigenous folk dancers presented “Gatta Ghori Dance” from Multan where dancers dressed as horsemen danced to the tunes of drums and chimta (tongs). The “Dharee” dance from Jhang was performed to the tune of loud drums.

The special feature was the folk dances from Kashmir in which dancers wearing vibrant coloured robes danced to the tune of Kashmiri musical instruments.

The “Shina dance” of Gilgit-Baltistan followed the beat of Dadang (drums) and Surnai (a flute-like pipe-shaped instrument), while “Leva Dance”, which originated from the coastal region of Makran, reflected the love of people from Balochistan.

Some special items were the “Shaukat Dholi Party” from Hafizabad, “Kalaash Folk Dance” from Chitral and Sindhi Jhoomer Dance from Hyderabad.