I want to thank you for the way you helped us when we were in bad situation, PM tells MBS
Our Correspondent February 18, 2019 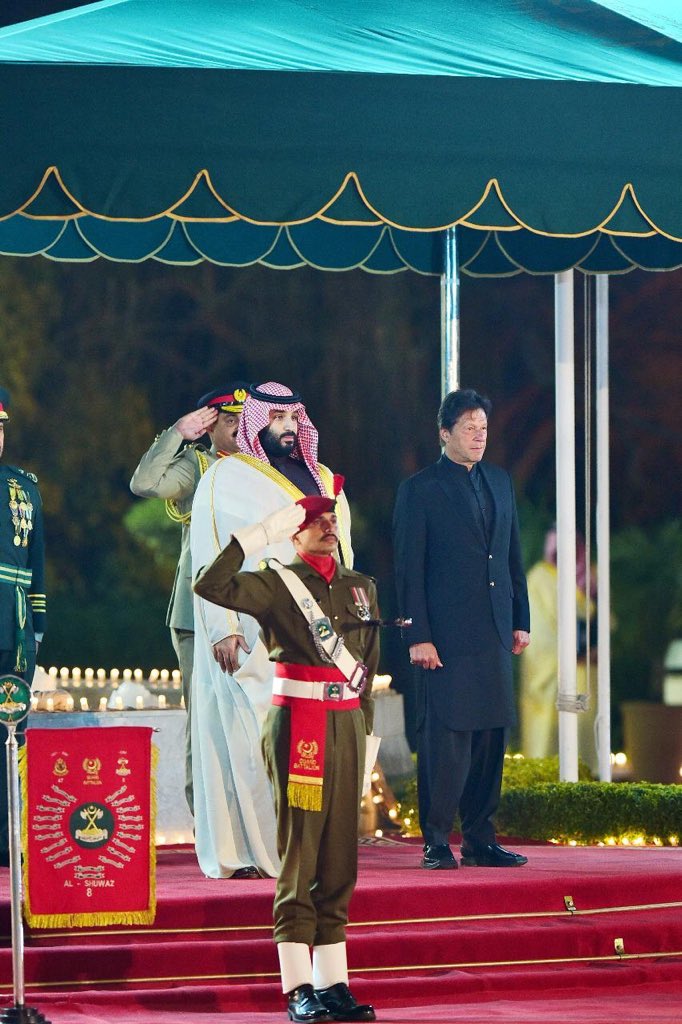 The tour will also take him to India and China.

A formation of JF-17 thunder jets and F-16 fighter jets escorted the plane of the crown prince after its entry into the Pakistani airspace. On arrival, the crown prince was given a 21-gun salute.

The twin cities of Islamabad and Rawalpindi have been decked out in images of the Saudi royal family and banners welcoming the crown prince.

The crown prince’s trip is being treated by Islamabad as the biggest state visit since Chinese President Xi Jinping in 2015. The visit marks a deepening in ties between allies.

A historic moment as His Royal Highness, the Crown Prince of the Kingdom of Saudi Arabia, Mohammed Bin Salman received by Prime Minister Imran Khan on his arrival at Nur Khan Air Base. 🇵🇰🇸🇦#CrownPrinceinPakistan #WelcomePrinceMBS #PakSaudiFriendship pic.twitter.com/61hDxb34ew

Kicking off his tour of South Asia and China with a far higher Pakistan investment than expected, the crown prince said the $20 billion figure represents only the start of an economic tie-up that would bring the historic Muslim allies even closer.

Upon arrival at the Prime Minister House, a contingent comprising personnel of all three services presented the Crown Prince a Guard of Honor. The visiting guest inspected the Guard of Honor. #CrownPrinceinPakistan pic.twitter.com/zOEDCZIIhN

“It’s big for phase 1, and definitely it will grow every month and every year, and it will be beneficial to both countries,” said the crown prince.

“We have been a brotherly country, a friendly country to Pakistan. We’ve walked together in tough and good times, and we (will) continue.”

Prime Minister @ImranKhanPTI personally receives and welcomes HE Crown Prince Salman at Noor Khan Air Base with cabinet members.This ushers in a significant era of brotherhood and cooperation between the two Islamic states.#CrownPrinceinPakistan 🇵🇰 🇸🇦 pic.twitter.com/r59lq1t8MI

Prime Minister Imran Khan and Army chief Qamar Javed Bajwa greeted Prince Mohammed on the red carpet of a military airport in the garrison town of Rawalpindi, before the prime minister personally drove the crown prince to federal capital.

“Saudi Arabia has always been a friend in need, which is why we value it so much,” said the prime minister, while seated next to Prince Mohammed. “I want to thank you for the way you helped us when we were in bad situation.”

The crown prince referred to the historic, brotherly and deep relationship between the two countries and expressed optimism that the same would further strengthen.

Prince Mohammed said the Kingdom of Saudi Arabia desired an economically and politically strong Pakistan. He said Pakistan had a great future under its new leadership.

The Prime Minister of Pakistan Imran Khan himself drove His Royal Highness, the Crown Prince of the Kingdom of Saudi Arabia, Mohammed Bin Salman to the Prime Minister's House. 🇵🇰🇸🇦#CrownPrinceinPakistan #WelcomePrinceMBS #PakSaudiFriendship pic.twitter.com/14KJBH1U2o

He said it was his maiden tour to the region and it was Pakistan where he had arrived first after becoming the crown prince.

The prime minister, welcoming the Saudi Crown Prince, said it was a great day for the Pakistani people.

He said Saudi Arabia and its people lived in the hearts of Pakistanis not only because Makkah and Madina were in Saudi Arabia but owing to the fact that the Kingdom had always been supporting Pakistan in the hour of need. “We value it much.”

The Prime Minister said with the last six months in power, the greatest moment for him was to visit Makkah and Madina where he was allowed to go inside Makkah and Madina and for which he was personally thankful to the Kingdom.

Crown Prince of the Kingdom of Saudi Arabia, Mohammed Bin Salman told Prime Minister of Pakistan to consider him the “Ambassador of Pakistan” in Saudi Arabia.#CrownPrinceinPakistan #PakSaudiFriendship
(3/3) pic.twitter.com/dDjXMrKRdf

He also thanked the Saudi Crown Prince for the financial support the Kingdom had extended recently to Pakistan.

The prime minister said with such cooperation and growing partnership, both the countries were taking their ties to such a level which had never been seen before.

He said with the brilliant prospects and excellent opportunities in the China Pakistan Economic Corridor (CPEC), Pakistan welcomed Saudi Arabia to participate in the regional development.

Prime Minister Imran Khan referred to the problems of Pakistani Hajj pilgrims in Saudi Arabia and requested that their immigration should be done in the three big cities of Pakistan.

He also mentioned the problems faced by Pakistani workers in Saudi Arabia, whom he considered very close to his heart and very special. He said about two million Pakistanis were living in Saudi Arabia and requested the Crown Prince to look into their issues.

Imran also requested the Crown Prince to take measures for the early release of 3,000 Pakistani prisoners jailed in Saudi Arabia.

The crown prince, in response, assured the prime minister that Saudi Arabia would do whatever it could to address those issues.

"We know Pakistan is going to be a very important country in the coming future and we want to be a part of it"
~ Crown Prince of the Kingdom of Saudi Arabia, Mohammed Bin Salman#CrownPrinceinPakistan #PakSaudiFriendship
(2/3) pic.twitter.com/9cyPoZtkLG

The prime minister said the signing of MoUs between Pakistan and Saudi Arabia, which enjoyed historic relations, and investments in diverse areas, including minerals and tourism sectors, would be mutually beneficial for the two brotherly nations.

He referred to his conversation with the Saudi Crown Prince as he drove him from the Nur Khan Air Base to the PM House and said Prince Mohammed had a passion for tourism.

The Prime Minister said Pakistan with the world’s highest peaks had great tourism potential, particularly in the mountain tourism.

Crown Prince of the Kingdom of Saudi Arabia, Mohammed Bin Salman told Prime Minister of Pakistan to consider him the “Ambassador of Pakistan” in Saudi Arabia.#CrownPrinceinPakistan #PakSaudiFriendship
(3/3) pic.twitter.com/dDjXMrKRdf

The banquet, besides the Saudi delegation, was also attended by cabinet members, Chief of the Army Staff General Qamar Javed Bajwa and senior civil and military officials.