A nation­al emerge­ncy would allow Trump to dip into funds approv­ed for other purpos­es in order to build a border wall
By Reuters
Published: February 15, 2019
Tweet Email 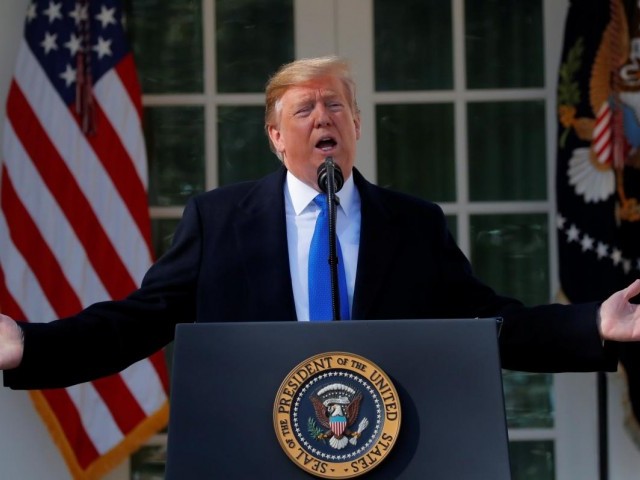 US President Donald Trump declares a national emergency at the US.-Mexico border as he speaks about border security in the Rose Garden of the White House in Washington, US. PHOTO: REUTERS

WASHINGTON DC: President Donald Trump said on Friday he would declare a national emergency at the US-Mexico border, a move expected to plunge him into a fight with Democrats over what they call an unconstitutional attempt to fund a wall without approval from Congress.

“We’re going to be signing, today, and registering a national emergency and it’s a great thing to do,” Trump said during an event in the White House Rose Garden.

Trump had demanded Congress include money for the wall, one of his biggest 2016 campaign promises, in a funding bill approved overwhelmingly by lawmakers on Thursday. That bill did not give Trump the wall money he wanted, a legislative defeat for him.

A national emergency, if not blocked by the courts or Congress, would allow Trump to dip into funds lawmakers had approved for other purposes in order to build a border wall.

Trump predicted the fight over the emergency order would likely end up at the Supreme Court.

The Republican president’s demand for $5.7 billion in barrier funding, and the refusal of Democrats to provide it, led to a record-long, 35-day December-January partial government shutdown that hurt his opinion poll numbers.

Some of the president’s fellow Republicans, while sympathetic to his view that the southern border is in crisis, have worried that the action steps into Congress’ constitutional authority to control the government’s purse strings, a position widely shared among Democrats.

Other Republicans have expressed concern that declaring an emergency to achieve policy goals might set a dangerous precedent, inspiring future Oval Office occupants to seize on the tactic to bypass Congress.

VIDEO: US President Trump says that he will declare a 'national emergency' in order to build a wall on the US-Mexico border without funding from Congress pic.twitter.com/AkzJchKFvc

Schedule finalised: Saudi crown prince to arrive on Feb 17 instead of 16