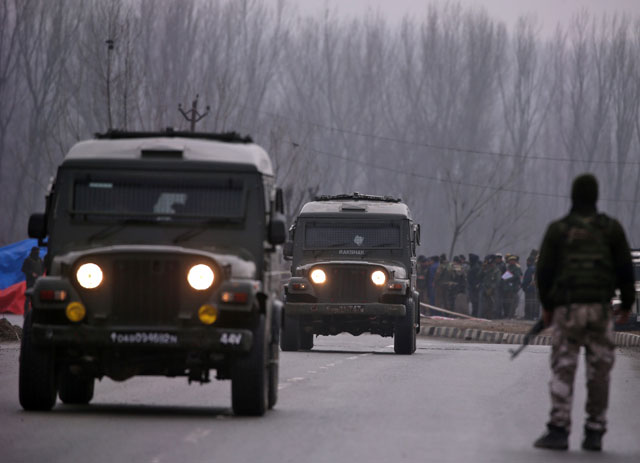 NEW DELHI: The 44 Indian paramilitary police killed by a suicide attack in occupied Kashmir on Thursday were part of a force that is little appreciated, poorly paid and under resourced when compared with the army, according to former senior officers.

The dead came from towns and villages across India, from Assam in the remote northeast to Tamil Nadu in the south. But their job in the Central Reserve Police Force (CRPF) took them to some of the most dangerous frontlines in India, including the fight in Indian occupied Kashmir.

“CRPF has been tasked to be first responder in insurgent situations. This is the primary task,” said Pranay Sahay, a former CRPF director general. They fight alongside the army, yet they are paid less and
get fewer benefits and less training, former officials said.

A low-ranking army soldier typically receives one-and-a-half
times the pay of a CRPF officer of equivalent experience, said
Ranbir Singh, general secretary of the Confederation of
Ex-Paramilitary Forces Welfare Associations, a difference which
is also reflected in their pensions.

“We almost work in the same situation, in the same place, but definitely the feeling in the force is that we’re not treated on par,” a former CRPF director general said, asking not to be named.

“We’re like a body,” he said, referring to all the security forces, including the army. “Just because the heart is more important, you can’t ignore the knee.”

Living conditions are poorer, a sensitive issue when so many
of the police are so far away from home, former officers said.

Suicide rates are much higher than in the army, they added. “The housing satisfaction level in the CRPF is the poorest,
probably around 13-14 percent,” Sahay said.

Many had to pay for private accommodation for their families because the CRPF could not provide a decent alternative, he added.

One of those who died in Thursday’s attack was Bablu Santra, who had been in the CRPF for 19 years. Family and friends gathered at his home in Bauria village, about 40km from the eastern city of Kolkata, on Friday, lighting candles in front of his portrait.
An Indian flag hung across the unpainted, incomplete two-storied building.

“He was looking forward to coming back and completing the
house,” said Chandan Das, Santra’s nephew. “But that won’t
happen now.”