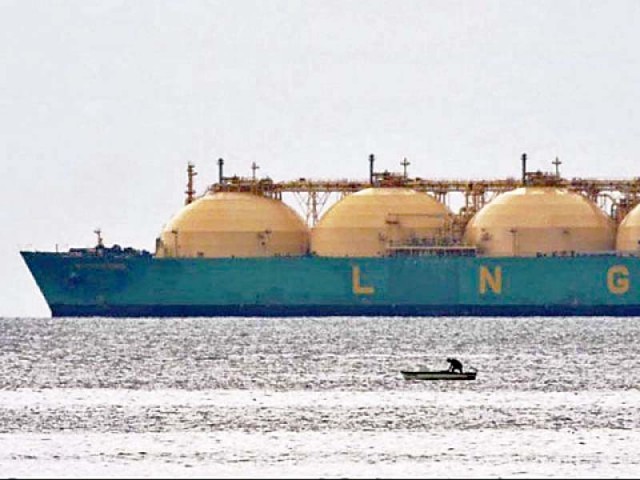 At the Pakistan GasPort Terminal, Pakistan LNG Limited (PLL) has dedicated capacity of 600 mmcfd whereas commodity trading company Trafigura has a capacity of 150 mmcfd, which wants to allocate it to the private sector. PHOTO: FILE

ISLAMABAD: Private-sector players have approached the government, seeking allocation of idle capacity of liquefied natural gas (LNG) terminals for gas import at competitive rates in a bid to feed power plants and industrial units without involvement of state-run enterprises.

LNG consumers have already paid an additional $45 million in 2018 due to unutilised capacity of LNG terminals and are also expected to bear an extra cost of $40 million in the ongoing year.

The regulator of LNG terminals – Pakistan LNG Terminals Limited (PLTL) – has also recommended to the government to allow the private sector utilise the idle capacity of LNG terminals for a smooth supply of imported gas.

Gas companies and power producers have not placed firm demand for LNG supply, which has prevented LNG terminals from tapping their full capacity, resulting in an additional burden of millions of dollars on the consumers.

Sui Northern Gas Pipelines Limited (SNGPL) has recently requested the Petroleum Division to take steps to enhance LNG re-gasification at the Pakistan GasPort terminal to the maximum capacity of 750 million cubic feet per day (mmcfd). This, it said, would help meet extraordinary demand from the power producers, which was crossing 1 billion cubic feet per day.

Such optimal utilisation of both the LNG terminals at 1,350 mmcfd – 600 mmcfd by Engro Elengy Terminal Pakistan Limited and 750 mmcfd by the Pakistan GasPort terminal – can meet maximum requirement of the power sector in summer months this year.

SNGPL has suggested that power producers should sign a gas supply agreement on “take and pay” basis.

However, the power sector has refused to sign the deal with SNGPL. At present, SNGPL is supplying imported gas to different independent power producers like Rousch, Halmore, Sapphire and Orient.

At the Pakistan GasPort Terminal, Pakistan LNG Limited (PLL) has dedicated capacity of 600 mmcfd whereas commodity trading company Trafigura has a capacity of 150 mmcfd, which wants to allocate it to the private sector.

A shareholder in these IPPs – Energas, which has also shareholding and clients in large industrial groups in Pakistan such as power generation companies, textile, chemical and manufacturing companies, has approached the Petroleum Division to allocate the idle capacity of terminals for LNG import at competitive rates.

“Your team has developed a road map for the release of unused LNG terminal capacity to the private sector, which is a step in the right direction, encouraging the private sector to reduce risk exposure to the government,” Energas Chief Executive Officer Anser Khan said in a letter to Petroleum Division Secretary Mian Asad Hayauddin.

He pointed out that PLTL had shared the way forward for capacity release to the private sector and the Power Division shared the annual plan for electricity supply.

“These steps will allow the private industry to secure LNG on a competitive basis, reinforcing the government’s commitment to liberalisation of the energy sector,” he said.

Separately, United Gas Distribution Company (UGDC), in a letter sent to the Petroleum Division, said in order to mitigate gas shortages and optimising the unutilised private capacity at the second LNG terminal the private capacity holders should be encouraged to immediately utilise the capacity by importing and providing LNG for the private sector including compressed natural gas (CNG) outlets.

“This arrangement will relieve the government of the financial burden and off-take commitment for the provision of gas to the CNG sector, besides easing gas crisis in the country,” it said.