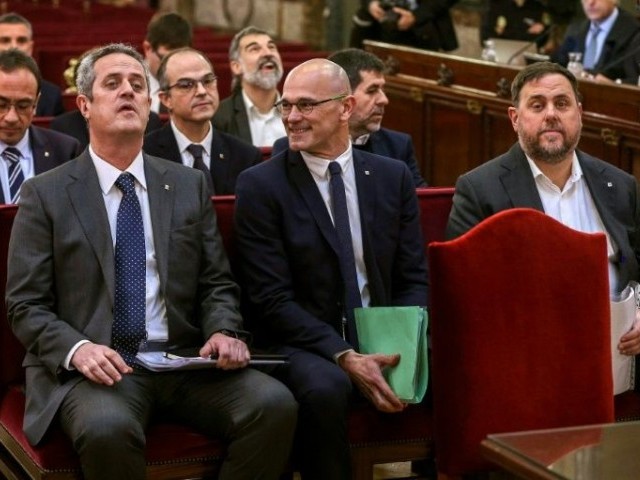 The former Catalan separatist leaders went on trial in Madrid for their 2017 independence bid. PHOTO: AFP

MADRID: Catalan separatist leaders accused of rebellion for trying to make their region independent from Spain launched their defence on Tuesday at the start of a long-awaited trial.

Sitting on benches in the ornate chamber of Madrid’s Supreme Court, the defendants faced a row of judges and a Spanish flag in proceedings broadcast live on television.

Twelve defendants are in the dock over an independence referendum, held on October 1, 2017, in defiance of a court ban, and a short-lived declaration of independence.

Nine of them are charged with rebellion and three face lesser charges of disobedience and misuse of public funds.

The independence bid sparked Spain’s deepest political crisis since the transition to democracy in the 1970s after the death of dictator Francisco Franco.

“This case targets political dissidence,” said Andreu Van den Eynde, the lawyer for two defendants including Catalonia’s former vice president Oriol Junqueras, who could face up to 25 years in jail.

The lawyer accused authorities of violating the defendants’ fundamental rights.

Spain has been forced to defend its judiciary against criticism.

In a rare move, Spanish embassies in several European capitals and further afield briefed reporters on Monday and Tuesday, handing out a file entitled “12 falsehoods about Spain” to refute common separatist claims such as the lack of impartiality of all judges.

“It’s very important for us to show that we’re a country that has nothing to hide, that follows the law and procedure.”

Many Spaniards support the trial, shocked by the actions of Catalonia’s regional executive in October 2017.

But separatists in Catalonia have dismissed the trial as a politically-motivated “farce”.

Carles Puigdemont, Catalonia’s former president who fled Spain days after the independence declaration on October 27, is not among the defendants.

Spain does not try suspects in absentia for major offences.

Speaking from Berlin, Puigdemont said the trial was a “stress test for Spanish democracy”.

He called on the international community for help, asking the European Union why it was more concerned with Venezuela than Madrid.

In his absence, the trial’s main protagonist is his former deputy Junqueras, who opted to remain in Spain.

The 11 other defendants include members of Catalonia’s former executive, the two leaders of powerful pro-independence associations, ANC and Omnium Cultural, and the former president of the Catalan parliament. They could face jail terms of seven to 17 years.

The nine defendants charged with rebellion have been in pre-trial detention for months, some of them for more than a year.

Controversy has swirled over the charge of rebellion.

Under Spanish law, rebellion is defined as “rising up in a violent and public manner”. But opinion is divided over whether the independence bid was violent.

Prosecutors say the defendants “called on citizens to participate in the October 1 referendum knowing it was illegal and that explosions of violence could therefore take place”.

They accuse the police of brutality during the referendum.

Carles Mundo, one of the defendants, told AFP in court it was “absurd.”

“The violence needed to justify these offences didn’t happen, as everyone was able to see, nor did misuse of public funds.”

Hundreds of witnesses have been called to testify, including former conservative prime minister Mariano Rajoy who was in office at the time of the Catalan referendum.

The opposition accuses Prime Minister Pedro Sanchez of “high treason” over his negotiations with Catalan separatists.

Sanchez, a Socialist who came to power in June with the support of Catalan nationalist parties, had tried to defuse tensions by resuming talks which were called off under Rajoy.

But those broke down on Friday.

Sanchez’s minority government is relying on the support of Catalan separatist parties to approve its 2019 budget.

But the separatists have vowed to block it during a parliamentary vote on Wednesday, opening the door for Sanchez to call an early general election.