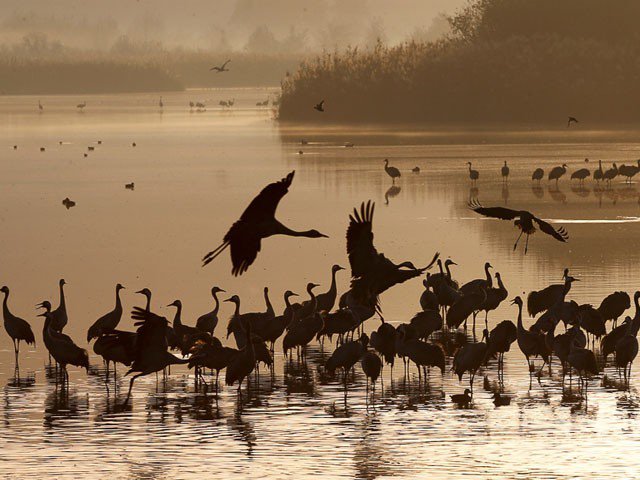 Welcome no more: Siberian migratory birds which made their way to Sindh every winter season, have largely stopped coming due to various reasons. Photo: file

KARACHI: The number of migratory birds coming in from Siberia has declined drastically over the past three decades. Around 150,000 birds, including local and migratory waterfowl, were estimated to have landed at 12 aquatic ‘stopovers’, which is 70% less than in 2017-2018, according to a survey conducted during the winter season.

The migratory birds usually arrive in Pakistan at the end of August and begin leaving in February. The birds are all gone by March.
As the temperatures in Siberia drop below -30 degrees Celsius, the birds make their way to warmer climes. The route of the migratory birds is called ‘Flyway Four’ or the ‘Green Route’ in Pakistan. The migratory birds fly From Siberia, over Afghanistan and into Pakistan, where they track the Indus River on the way to Sindh.

Sindh Wildlife Game Officer Rasheed Ahmed Khan said that Pakistan has 19 sites where birds land, 10 of which are located in Sindh.
The migratory birds temporarily stop in Thatta, Rann of Kutch and Thar coastal areas. Later, they gradually spread to other lakes. Scores of birds stay at three Thattha lakes, Haleji, Keenjhar and Hadbero. A large number of birds arrive at Larkana’s Langh Lake, Drigh Lake and the Hamal Lake in the Qamber district. The birds live in lower and upper Sindh, feed there and stay at their habitats.

The Sindh Wildlife and Zoological Survey of Pakistan surveyed Hawkes Bay and 12 lakes in upper Sindh, including Keenjhar, Haleji, Hadero, Langh, Hamal, Manchhar, Daeihya Akro, Narardi, Mehrano, to determine the number of aquatic birds last year. Around 64 different species of local and migratory birds were identified. The total number of birds in the census stood at 153,916.

According to the experts, there are several reasons for the decline of the migratory birds in Pakistan, specifically Sindh, and both natural and human interventions are to blame.

Charity is for the birds

Natural causes
World Wildlife Fund (WWF) Technical advisor Moazzam Khan said that less rainfall, dried up water passages and the changing of the location into agricultural land were the major reasons for the decline.

The system of two important fresh water lakes has also been ruined in Badin district. Tsunami has caused saltwater to intrude Jhabo and Nardri lakes. The change of the lake’s water into saline water is drastically affecting the quality of life of marine animals and plants, and causing the number of the migratory birds visiting the lakes to decline. Moazzam said that both lakes were few of the important abodes for the migratory birds. A total of 4,601 birds arrived at Nardi habitat, which is considered as the best lake for the birds. A greater number of birds used to arrive here earlier.

He said that the natural habitat of the migratory birds will have to be improved to ensure the birds breed. He added that dried up water passages will have to be restored through provision of sweet water.

Badin District Game Inspector Ali Muhammad Nizamani said that the water shortage in the canal system and the decrease in rainfall combined with release of pollutants had systematically poisoned the lakes in Sindh and caused the birds to opt for safer lakes in neighbouring countries. He added that immediate preventive steps needed to be taken to address the issue.

Human intervention
Moazzam said that several water bodies in Sindh have been occupied and residential homes have been built or they are being utilised for agriculture and fish farming.

Hunting is permitted only in 13 areas and is strictly prohibited in 34 locations, all of which are habitats of migratory birds. But despite the prohibition, illegal and unchecked hunting has been going on for the past three months.

An expert hunter, requesting anonymity, said that innumerable migratory birds used to fly to Sindh during 1984, the time since he has been into hunting. Now, only 30% of them come to the province. He added that previously people used to hunt in limited places and as a hobby, for which the government used to issue permission deeds.

In the past decade, he said, hunting has turned into a business and powerful feudal lords allow people to hunt in Tando Adam Khan, Sujjawal, Keenjhar Lake and several other locations. A 1km game reserve is built with a bunker, he said, and five to eight hunters are allowed to use it. Each bunker is sold out for Rs150, 000. Several bunkers are built to hunt the migratory birds.

A social worker, Salman Baloch, opined that netting was a worse practice than hunting.

Many man-made lakes spanning several kilometres are built as private properties in Badin, Thatta, Sujjawal and other districts for fish farms. He said that the birds are caught in these temporary lakes through big nets.

On the other hand, Sindh Wildlife Game Officer cited the Afghan war as a factor in the decline in migratory bird populations. “The wars going on for 40 years have affected the route of the migratory birds which used to travel towards Pakistan.”

Speedboats, fish farming and several other human activities on the lakes are also affecting the arrival of the birds.

Addressing the concerns, Sindh Wildlife Department Conservative Taj Muhammad Sheikh said that the department faced a shortage of staff and transport facilities. However, he added, the department was taking every possible measure for the conservation of wildlife with the available resources. “Netting is an illegal process and strict actions are being taken against those involved,” he said. Hunting of the migratory birds under legal conditions is permitted on specific locations. Sheikh said that Sindh wildlife department was taking stern actions to curb illegal hunting.

Moazzam said that the government should ban hunting for the conservation of the migratory birds or it should be brought under control and concrete steps should be taken for its monitoring.